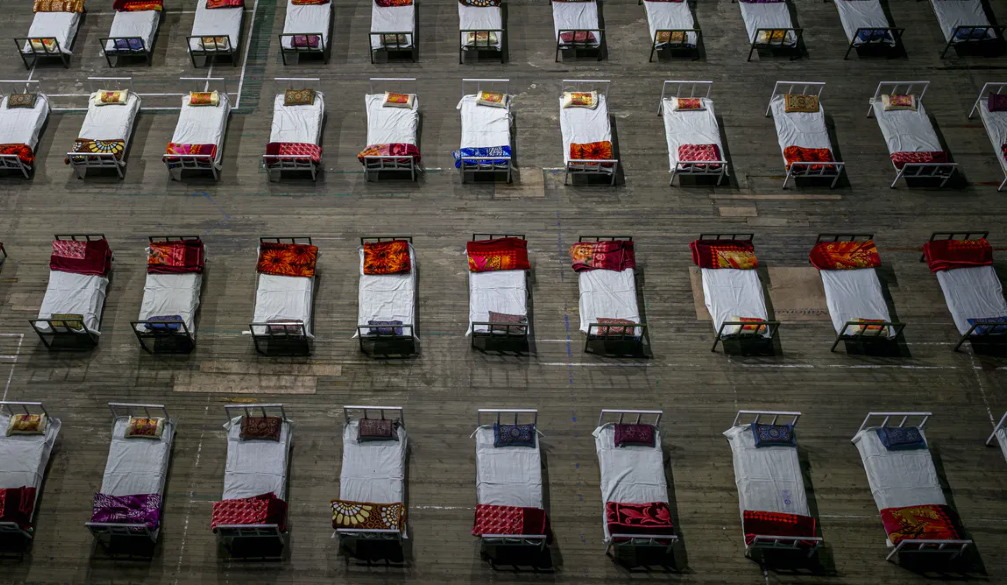 Getting the right “balance” is one of the main challenges when framing and executing policies. The difficulties of achieving this are being exposed currently on two fronts – the repatriation of Australians and relations with China.

The politics of risk and fear have been central in managing COVID from the start. State and territory leaders in particular have been risk-averse, and they’ve won praise and votes for it.

With this week’s federal government decision to suspend flights bringing Australians home from India, Scott Morrison, who has believed some premiers have been excessively cautious during the pandemic, showed himself just as reluctant to take a risk.

As COVID rages in India, with thousands dying daily, more than 9,000 Australian citizens and residents are trapped. Flights, government-sponsored and commercial, are “paused” until at least May 15. Indirect routes back are mostly blocked too.

The decision to suspend was prompted by the escalating crisis leading to returnees from India suddenly forming a high proportion of the COVID cases in Australian quarantine.

One of these returnees was at the centre of the recent Perth COVID leakage from quarantine that led to a three-day lockdown there and had Premier Mark McGowan slash the number of quarantine arrivals he was willing to accept.

But where is the right “balance” here, between the safety of the community and the obligation owed to Australians caught in this extreme situation? Moral as well as practical issues should be weighed. There is a strong argument the government has got the balance wrong.

Obviously the prospect of outbreaks in the Australian community has to be minimised. At the same time, the well-being of our fellow Australians in India, some 650 of whom are described by the federal government as “vulnerable”, should also be a priority.

To do the proper thing by these people could mean a slightly higher risk level for the community at home. But it would be very small.

There have been breaches, but our quarantine system is basically effective. Lessons have been learned and arrangements progressively strengthened (although more still needs to be done).

Also, it should not be beyond the wit of government to obtain extra quarantine capacity even if only on a temporary basis, or to rearrange other arrivals for a few weeks. And the Howard Springs facility in the Northern Territory is about to expand.

Read more: More than a dozen COVID leaks in 6 months: to protect Australians, it's time to move quarantine out of city hotels[1]

If we can’t move, at a minimum, the vulnerable (and preferably a lot more) people out of India ASAP, it doesn’t say much for us as a country, morally or organisationally.

The “balance” we should be seeking in relation to policy on China involves very different issues.

Australia needs to firmly back its national interests while avoiding unnecessary provocation.

It’s been clear for some time Australian foreign and defence policy is operating on the assumption China will be a growing threat over the medium term. This goes well beyond the present tensions in the bilateral relationship, which have seen China retaliate against Australian exports.

Australian defence policy has been, and is being, reset as China becomes more assertive, militarily and diplomatically, in the region. Australia’s attention to its Pacific neighbours has been stepped up in response to China’s efforts to woo them.

On the evidence, the reset is justified, although China experts differ among themselves about the potential threat. More disputed than the basic strategy, however, is the wisdom of individual measures and statements that rile the Chinese.

For example, some critics suggest the federal government was ill-advised when, with a fanfare of publicity, last week it quashed the Victorian government’s agreements made under China’s Belt and Road Initiative. The action was taken following new federal legislation enabling the review of agreements between states, territories and public universities and foreign governments.

The Lowy Institute’s Richard McGregor has written: “There can be little argument that Victoria should not have entered into these agreements. But that doesn’t mean they should have been unwound in the frontal manner in which they were.”

McGregor suggests a more subtle approach could have been used, such as persuading Victoria “to allow the agreements to die a natural death, without fanfare”.

The Victorian agreements certainly pale in importance compared with the deal the Northern Territory government did a few years ago to lease the Port of Darwin to a Chinese company.

This agreement does not fall under the recent legislation; while there is concern in hindsight, ending the arrangement would cause serious friction.

Much drama has centred this week on the Anzac Day missive Mike Pezzullo, secretary of Home Affairs, sent to his departmental staff.

“In a world of perpetual tension and dread, the drums of war beat — sometimes faintly and distantly, and at other times more loudly and ever closer,” Pezzullo wrote.

“Today, as free nations again hear the beating drums and watch worryingly the militarisation of issues that we had, until recent years, thought unlikely to be catalysts for war, let us continue to search unceasingly for the chance for peace while bracing again, yet again, for the curse of war.”

Pezzullo didn’t mention China but he didn’t need to. The Chinese had no doubt they were in the frame and condemned the senior Australian public servant as a “troublemaker”.

The Chinese know Pezzullo well – he was the lead author of the 2009 defence white paper which gained attention for its blunt warning about growing Chinese military power.

Pezzullo’s Anzac comments – reported in The Times in the UK under the headline “‘Drums of war beating’ warns Australia as China tension grows” – can be viewed as a lofty statement of the obvious, or as spelling out too explicitly what the diplomats might prefer left unsaid.

Critics wonder at the Anzac Day timing of such forward-looking comments and say it’s not the place of a public servant to be speaking out anyway.

Before he issued it, Pezzullo gave his statement – as a courtesy, rather than for vetting – to his new minister, Karen Andrews, who raised no objection.

But it did not go to Morrison who, when asked for his reaction, stressed the pursuit of peace. The PM, in the Northern Territory this week talking about defence, was less than pleased to have a bureaucrat unbalancing his messaging.

After Peter Dutton shifted from home affairs to defence in the recent reshuffle, Pezzullo was touted as possibly following him. But Morrison has no plans to move him, least of all when Andrews, without national security experience, has just arrived in this home affairs behemoth.

The attention on Pezzullo will subside but Dutton will be closely watched for what balance he strikes in his new post.

Dutton wants a high profile as defence minister, and he’s never been one to mince his words.

And tough words on China can play well with voters who, according to surveys, have become very suspicious of that country. Dutton is the leader of the right in the Liberal Party and aware of his hawkish base.

Keeping in the spotlight while not causing unnecessary diplomatic trouble will require a delicate dance. Dutton doesn’t look like a man light on his feet, but we’ll see.