Australians woke up to the freelancing advice this week that “drums of war” were beating louder in their neighbourhood, according to the country’s top security official.

It is hardly news that regional anxiety is rising as the countries of the Indo-Pacific scramble to accommodate China’s surging power and influence.

However, an essay by Michael Pezzullo, Home Affairs secretary[1] that spoke publicly of a possible war with an unnamed adversary, ventured into territory not previously traversed by government officials.

It appears not to have had the imprimatur of Prime Minister Scott Morrison[2]. Morrison did not repudiate Pezzullo’s remarks, nor did he endorse them. He said[3] Australia’s goal was to “pursue peace and stability” and a “world order that favours freedom”.

This is what Pezzullo, whose responsibilities include the domestic spy agency the Australian Security Intelligence Organisation, said in a message to his staff without directly mentioning the dragon in the room — China.

In a world of perpetual tension and dread, the drums of war beat sometimes faintly and distantly, and at other times more loudly and ever closer […] until we are faced with the only prudent, if sorrowful course — to send off, yet again, our warriors to fight the nation’s wars. 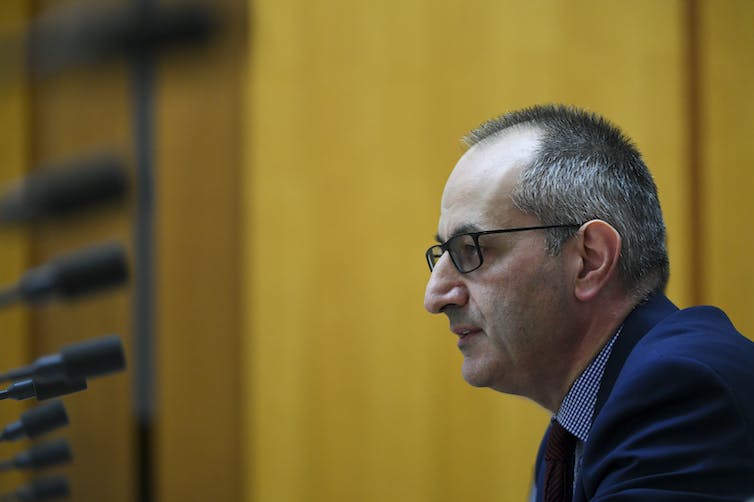 Pezzullo said in his ANZAC Day message that Australia must be prepared ‘to send off, yet again, our warriors to fight’. Lukas Coch/AAP

These words, untethered from any immediate threat, might have been put aside, but their timing has helped focus attention on the security challenges facing Australia at a moment of considerable strategic uncertainty.

The change of administration in Washington, along with a continuing deterioration in relations between Canberra and Beijing[4], has further unsettled Australia’s national security calculations in an age of regional uncertainty.

The simple question in all of this is whether conflict with China has become more likely, even inevitable? And whether hawkish elements in the Australian national security establishment, like Pezzullo, are overstating the risks?

Read more: Timeline of a broken relationship: how China and Australia went from chilly to barely speaking[5]

Is war over Taiwan likely?

The core of this discussion relates predominantly to Taiwan, amid the many other issues bedeviling relations between China and the West.

These include human rights abuses in places like Xinjiang[6], the abrogation of the “one country, two systems” agreements over Hong Kong[7], China’s abrasive, mercantilist economic practices[8], its suspected cyber intrusions[9], and its aggressive base construction in the disputed waters of the South China Sea[10].

All of these issues cause tensions with its neighbours and the wider international community.

However, it is China’s recent threats against Taiwan that have emerged as the most vexed issue. They present a risk, however remote, of a military confrontation between superpowers.

Barring a miscalculation by either side in a tense environment, the likelihood of open conflict is low, given the potential costs involved on either side.

On the other hand, unless Washington and Beijing achieve new understandings that lower the temperature in and around the Taiwan Strait, Taiwanese security will continue to weigh heavily on America and its alliance partners in the Asia-Pacific.

As an ANZUS Treaty[11] ally of the United States — and with its own regional security preoccupations — Australia cannot avoid contemplating the possibility of a meltdown in the Taiwan Strait.

This includes the perennial question of whether Australia would involve itself militarily against China if asked to do so by its treaty ally. Such an outcome hardly bears contemplating.

Read more: With China's swift rise as naval power, Australia needs to rethink how it defends itself[12]

Will the US make clear its intentions on Taiwan?

In its initial interactions with China on the Taiwan issue[13], the new Biden administration is treading carefully. This is in contrast to its predecessor, whose foreign posturing tended to follow the fluctuating whims of Donald Trump.

Among the options for Biden’s State Department is one that would transition America’s approach to Taiwan from one of strategic ambiguity to clarity.

This means rather than taking a non-explicit approach — leaving open the option of a military response should China seek to reunify Taiwan by force — the US would make an explicit declaration[14] that it would would, in fact, respond militarily.

This approach is gaining support in Congress, where sentiment has hardened against China’s behaviour on various fronts. 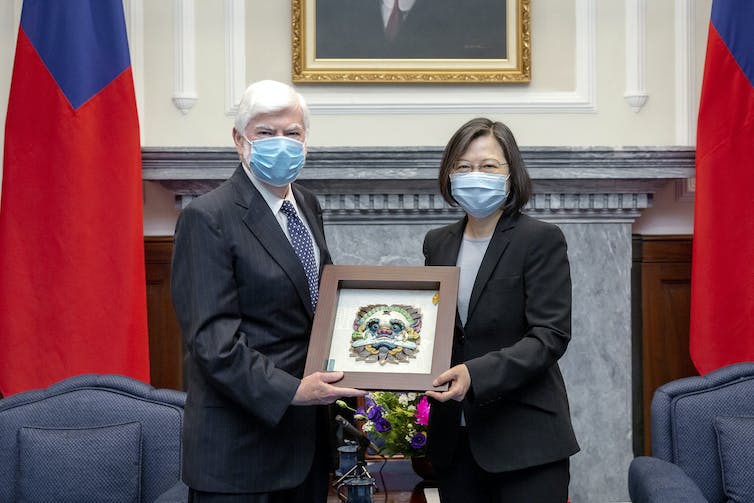 Former Senator Chris Dodd led a US delegation to Taiwan this month to reaffirm Washington’s commitment to the self-governing island. Taiwan Presidential Office/AP

It would be premature to declare a watershed has been reached on the Taiwan issue in which the US would make clear its intentions. But the debate appears to be heading in that direction.

Richard Haass, the president of the Council on Foreign Relations, penned an influential essay in the September 2020 edition of Foreign Affairs[15] in which he declared a policy of strategic ambiguity had “run its course”.

The time has come for the United States to introduce a policy of strategic clarity: one that makes explicit that the United Sates would respond to any Chinese use of force against Taiwan. Such a policy would lower the chances of Chinese miscalculation, which is the likeliest catalyst for war in the Taiwan Strait.

Haass has a point.

In another essay published this month[16] by three veteran security analysts, however, the authors issue a warning that “hyping the threat China poses to Taiwan does China’s work for it”.

As troubling as the trend-lines of Chinese behaviour are, it would be a mistake to infer that they represent an unalterable catastrophe. China’s top priority now and in the foreseeable future is to deter Taiwan independence rather than compel unification.

Beijing’s crude policy of conducting war games in Taiwan’s vicinity, including intrusions into its airspace, might suggest China is preparing retake the island. But the question is at what cost to its international standing, economic interests, and internal stability?

What is much more likely, Haass argues, is China will continue to exert pressure on Taiwan by various means in the hope that “once ripe the melon will drop from its stem”.

It shouldn’t be overlooked that in its latest five-year plan, China reaffirmed[17] a policy guideline of pursuing “peaceful development of cross-strait relations”.

Read more: Despite strong words, the US has few options left to reverse China's gains in the South China Sea[18]

Finally, in all of this, there is the cold hard calculation of the military balance in the Taiwan Strait.

In its latest annual report[19] to Congress, the US Department of Defence acknowledged China had “achieved parity with — or even exceeded – the United States” in three areas: shipbuilding, land-based ballistic and cruise missiles, and air defence.

In other words, the military balance in the Taiwan Strait is continuing to shift in China’s favour. This reality makes loose talk of Australian “warriors” responding to the trumpet call of war even less palatable.