Very recently in the Bay of Bengal a naval exercise took place[1] involving India, France, Japan and Australia. While it received little or no coverage in New Zealand, it nonetheless represented a foreign policy challenge as serious as any other this country currently faces.

The exercise was an extension of what is known as the Quadrilateral Security Dialogue[2], or “Quad” for short. At the core of this relatively recent security grouping are the four major Indo-Pacific democracies: the United States, India, Japan and Australia.

The Quad group can also expand to include others. France was participating in the Indian exercise as part of a “Quad-plus[3]” agreement — emblematic of emerging political alliances forming in response to perceived Chinese influence and belligerence in the region.

According to its joint statement[4], the Quad group is primarily committed to:

promoting a free, open rules-based order, rooted in international law to advance security and prosperity and counter threats to both in the Indo-Pacific and beyond. We support the rule of law, freedom of navigation and overflight, peaceful resolution of disputes, democratic values, and territorial integrity.

Given New Zealand’s strategic and economic relationships with China, one might expect this to be more widely discussed and debated. In fact, New Zealand has largely been missing from the picture when it comes to this major geopolitical shift. At some point, this will have to change. 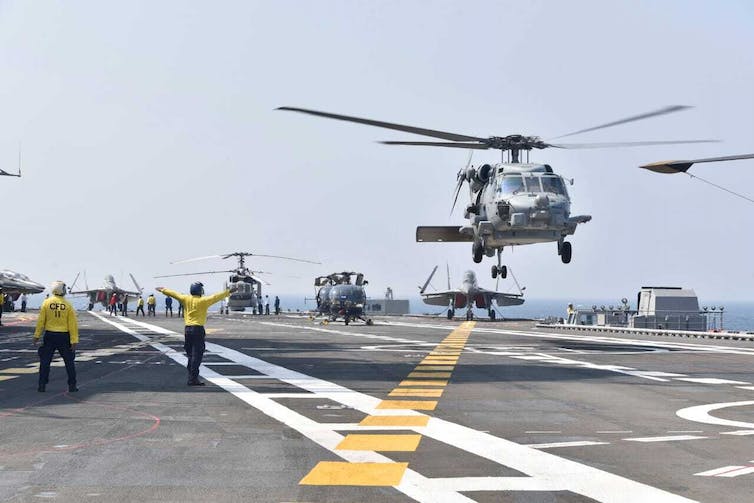 Helicopters land on an aircraft carrier during the Malabar naval exercise between India, the US, Japan and Australia in 2020. AAP

According to the US intelligence community’s recently released Annual Threat Assessment[7], China can be expected to continue its efforts to spread its influence, and drive wedges between Washington and its allies and partners.

There is little doubt China has become noticeably more aggressive within its sphere of influence. It has all but swallowed Hong Kong, contrary to its commitments under the Joint Declaration[8].

Britain, France and Germany all recently declared against[9] China’s island-building programme in the South China Sea, in breach of its obligations[10] under the UN Convention on the Law of the Sea. China has responded by authorising its Coast Guard to fire on vessels[11] in what it claims to be its territorial water.

Read more: What's at stake for NZ in Australia’s case against China at the World Trade Organisation?[12]

China is increasingly provocative[13] in its behaviour towards Taiwan, and continues to clash with India[14] along the two countries’ poorly defined border, without the underlying issues being resolved.

Where China has worked with the international community, such as in the investigation into the origins of COVID-19[15], the process has been less than ideal[16].

Similarly, China has rejected claims of genocide against the Muslim Uyghur population, and UN attempts to investigate[17] the situation seem permanently stalled. 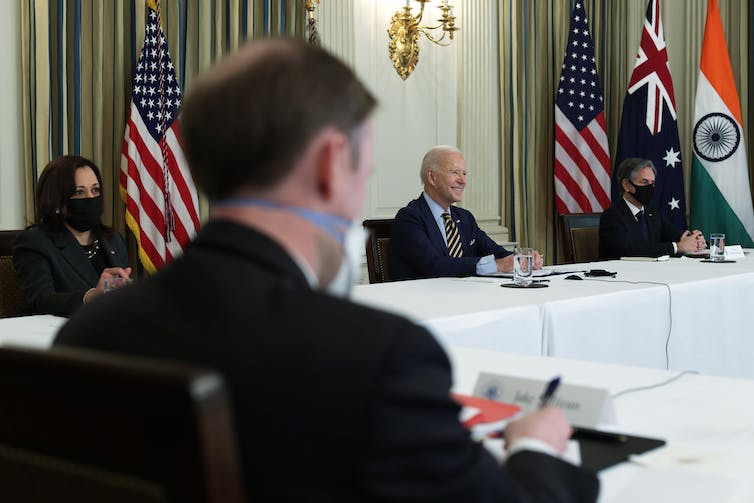 US Vice President Kamala Harris, President Joe Biden and Secretary of State Anthony Blinken in a virtual meeting in March this year with leaders of Quadrilateral Security Dialogue countries. GettyImages

Of course, speaking up comes with clear risks, as Australia discovered when China responded to criticism with a barrage of trade restrictions[18].

Chinese sanctions now extend beyond nations[19] to also cover parliamentarians, diplomats and even academics for actions or claims that “severely harm China’s sovereignty and interests and maliciously spread lies and disinformation”.

Even companies that question human rights standards within their supply chains risk boycotts and backlashes, such as happened to Nike and H&M[20].

The situation has now created the riddle of our epoch: how do we advance human rights, enhance respect for international agreements and secure economic prosperity — without sabre-rattling and increasing the risk of war?

Read more: Russia and China present a united front to the west – but there's plenty of potential for friction[21]

New Zealand sits on the fence

So far, the focus of the Quad alliance has been on military cooperation[22]. And while New Zealand has taken part in wider exercises[23], it has steered away from war games designed to demonstrate collective opposition to China.

Instead, New Zealand has preferred to make noises about democracy in Hong Kong[24], quietly grumble about the need for all countries to abide[25] by the law of the sea, and express “grave concerns[26]” over “credible” reports of severe human rights abuses in Xinjiang.

But New Zealand isn’t pushing as hard as its allies. When trade minister Damien O’Connor suggested other countries (notably Australia) “show respect[27]” to China, it caused a minor diplomatic meltdown.

The government has even avoided joining 14 like-minded nations in signing a joint statement[28] expressing concern over China’s cooperation during the World Health Organisation’s search for the origins of COVID-19.

Read more: The WHO report into the origin of the coronavirus is out. Here's what happens next, says the Australian doctor who went to China[29]

Time for more than lip service

There is merit in trying to be an honest broker[30], and it is part of New Zealand’s independent foreign policy position. But eventually we need some evidence of success (beyond a self-interested trade upgrade[31]), and so far that evidence is missing.

Without progress in the next six months, or if tensions escalate before then, sticking to the middle ground will look less like wise diplomacy and more like appeasement. The values[32] New Zealand professes to stand for – human rights, democracy and the rule of international law – have to be more than lip service.

New Zealand can either act as a genuine intermediary in negotiations with China about what a new, stable global order might look like. Or it can make a stand, with both words and actions, next to like-minded countries.

Putting its hand up for the next Quad-plus exercise is perhaps not ideal, but it’s an option that needs to be debated.