But, as with drugs in sport, it’s hard to tell when arguably legal ends and clearly illegal begins.

It is generally accepted that it is wrong to buy shares in the company you run when you know something about it that the market does not.

It’s especially wrong to buy shares when you are telling the market that things are much worse for the company than you know them to be.

But what about suddenly sharing everything – an avalanche of information – in the lead-up to a share purchase in order to muddy the waters and create enough uncertainty to lower the price?

Chief executives have enormous discretion over the tone and timing of the news they release, generally answering to no one.

A linguistic analysis of twelve years worth of news releases by 6764 US chief executives just published by myself and two University of Queensland colleagues in the Journal of Banking and Finance[1] suggests they are using this discretion strategically.

Not clearly illegal (how can oversharing be illegal?) their behaviour can have the same effect as talking down their share price while buying, something that is clearly illegal.

Spreads matter, as well as signs

Earlier analyses of insider trading have looked at only the “sign” of the information released to to the share market. On balance was the tone of one month’s news releases positive or negative? 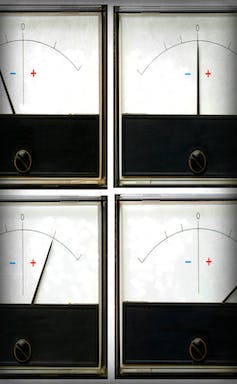 Spreads matter as well as signs.

We have looked at the “spread”, the range from positive to negative as well as the net result.

Our sample of discretionary (non-required) news releases is drawn from those lodged with Thomson Reuters News Analytics[2] between January 2003 to December 2015. It includes firms listed on the New York Stock Exchange, the AMEX American Stock Exchange and the NASDAQ technology-heavy exchange.

The archive scores the tone of each release as positive, negative or neutral.

We used the Thomson Reuters Insiders Filing Database[3] to obtain information on chief executive buying, limiting our inquiries to significant purchases of at least 100 shares.

About 70% of the chief executives proved to be opportunistic traders in the sense that they bought with no particular pattern, rather than at the same time every year.

We found that news releases by these chief executives increased information uncertainty by 5.8% and 3.6% in the months before they bought and in the month they bought.

In the months following their purchases, the positive to negative spread of their news releases returned to the average for non-purchase months.

The unmistakable conclusion is that their behaviour is strategic.

Read more: Insider trading is greedy, not glamorous, and it hurts us all[4]

We obtained similar results when we used other measures of buying and the tone of news releases.

Our results provide no evidence to support the contention that chief executives behave in this strategic way when selling shares. This is consistent with other findings suggesting that the timing of sales is often out of the hands of the sellers.

Previous studies[5] have found only weak links[6] between executive share purchases and the news they release to the market. This might be because those studies have looked for more easily detected (and more clearly problematic) negative news releases.

But that’s an old and (with the advent of linguistic analysis) increasingly risky approach.

Our research suggests that by saying many things at once chief executives can achieve much the same thing.