The aged care royal commission is the just the latest in an avalanche[1] of reviews and inquires over three decades that have found the same things: abuse[2] and neglect[3] and, lying behind them, appalling work conditions[4].

An analysis of the 6,631 submissions[5] received by the aged care royal commission shows that more than half dealt with workforce-related issues. Of the 296 witnesses who appeared before the commission, 252 gave testimony[6] related to workforce issues.

The line of inquiry continued this month when the commission began specific hearings[7] into the aged care workforce.

It is reflected in the results of a large survey conducted by unions representing aged care workers (the Health Services Union and United Voice) that finds nine out of ten aged care workers in residential and home care settings do not have enough time to provide the quality of care they think is necessary.

Some 87% of staff in residential facilities say they have to hurry people in their care because there are too many tasks to complete; 94% say they don’t have enough time to talk to them.

More than a third[9] say they are unlikely to still be working in residential aged care in five years’ time.

While these findings and many of the testimonials by staff and families are disturbing, conditions have been like this for decades. 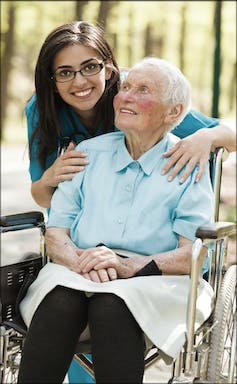 After all, our government is at the apex of the funding pyramid that ultimately sets the price of these services (and the wages of workers in it[11]) through more than A$20 billion[12] in direct expenditure.

Part of the answer must lie in the gendered nature of care work. Women comprise an extraordinary 90%[13] of the aged care workforce.

The continuing undervaluation of aged care work owes much to much female work being unpaid and therefore less visible, and to much of it involving care.

It means the progressive degradation of care work happened in the shadows, while the spotlight was directed at other, better-paid work.

Manufacturing jobs hit the headlines with the closure of factories decimated by decades of economic restructuring. More recently, we have been distracted by sexier topics such as the gig economy, automation, and the “future of work”.

About one-third of the aged care workforce are migrants[14], which adds to its invisibility. Migrants are often unable to vote and lack industrial clout.

It presents a problem.

If we don’t listen to aged care workers without clout, their conditions are never likely to improve to the point where they attract other workers who have clout.

New technologies[16] can help. Robots can do more than deliver meals to rooms. With assistance from virtual reality they can deliver emotionally intelligent companionship[17].

Online platforms can also enable the creation of worker-owned cooperatives that provide disability and aged care services. Cooperative Life[18] for instance has been successfully piloting the worker-owned model in areas of market failure.

There’s hope, but no guarantees

The challenge will be to leverage these new technologies to enable workers to develop more skills and enjoy more satisfying jobs.

As is often the case with new technologies there is a risk that instead they will enable a race to the bottom. It’s up to us.

The royal commission’s final report will be crucial in determining which future we choose.