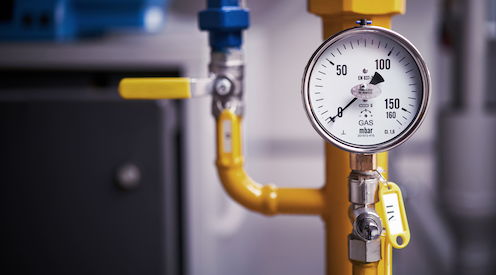 The Albanese government has accepted[1] the Australian Competition and Consumer Commission’s recommendation to “initiate the first step” to trigger the controversial Australian Domestic Gas Security Mechanism[2] to avert a supply crisis in eastern Australia.

What the competition watchdog hasn’t recommended is what to do about the gas price, which has little to do with supply.

In its latest half-yearly report[3] on gas supply, the ACCC predicts that, without action, eastern Australia will suffer a domestic gas shortage in 2023, and is concerned that already-high prices will go even higher.

The report identifies several causes. One is Russia’s war against Ukraine, which has European buyers seeking alternatives to Russian gas.

Competition and Consumer Commission[4] Australian liquefied natural gas (LNG) exporters have been keen to meet this demand and reap the high prices they are willing to pay. But the report also makes clear there are significant problems with the Australian gas market itself, with ineffective competition between gas producers, poor compliance, and an apparent lack of real commitment by gas exporters to the agreement they made with the federal government to ensure affordable and sufficient gas for domestic users. Frustratingly though, the report has little to say (beyond expressing concern) about the more immediate issue of escalating domestic prices. Looming shortage The report identifies an east coast gas supply of 1.98 billion gigajoules in 2023 – well in excess of domestic demand of 571 million gigajoules. 1.3 billion gigajoules of that supply is needed to meet long-term LNG export contracts. The ACCC has identified there will be a shortfall of 56 million gigajoules if the LNG producers export all of the 167 million gigajoules they will have in excess their contract obligations. To avoid this shortfall, the ACCC has recommended the government take the first step in initiating the Australian Domestic Gas Security Mechanism[5]. This involves determining if 2023 will be a “shortfall year”. Federal resources minister has said the government will take this step. Read more: The 'gas trigger' won't be enough to stop our energy crisis escalating. We need a domestic reservation policy[6] If the government finds it will be a shortfall year, it can require exporters to offer their uncontracted gas to the domestic market first. Whether the government will need to do that will depend on negotiations with the exporters – in particular the three joint venture exporters and their associates the ACCC says have influence over close to 90% of proven and probable eastern Australian reserves. The ACCC report expresses concern that some LNG exporters “not engaging with the domestic market in the spirit” of an agreement[7] they signed: Even if the behaviour could be proven to be technically compliant, we consider that some suppliers are not engaging with the domestic market in ways that are likely to result in supply agreements being reached and market conditions noticeably improving It is also concerned the joint venture operators might be breaching the Competition and Consumer Act by effectively engaging in joint marketing without ACCC approval. Another concern is the cost of transmission, with pipeline owners enjoying local monopolies. The ACCC has stopped short of recommending regulating the prices they can charge. Few clues on prices Where the recommendations fall short is on what to do about rising prices. Even before the looming shortfall, wholesale and retail prices to businesses have been climbing steadily for a year. The report says some prices have been doubled. The ACCC has been operating on the superficially reasonable basis that domestic gas prices should be no higher than international ones. It has been using “export parity prices” to indicate what the price would be if the federal government’s agreement with LNG exporters was functioning well. On that metric, the agreement is functioning well. Domestic prices have largely followed international prices. But those prices have soared from A$3-10 per gigajoule to well above A$40. Read more: Why did gas prices go from $10 a gigajoule to $800 a gigajoule? An expert on the energy crisis engulfing Australia[8] The result is windfall profits to producers and unaffordable prices for domestic users of the kind that cannot be accepted as a well-functioning market. The report makes no recommendation to address this problem. While there have been arguments for a domestic reservation policy[9], a better way to address the price problem is a “windfall profit” tax on gas producers. Even the threat of such a tax should be a brake on unfair domestic prices. The ACCC could set a price threshold to trigger the tax. It could be tailored to the specific circumstances and made defensible against claims of sovereign risk[10]. A windfall profits tax would be a start Most of the findings of the latest gas inquiry report are neither new nor surprising. Yet their impact on gas users is heavy, and will get worse if further action is not taken. The government has most of the tools it needs. It should act on the ACCC’s recommendations to meet the possible 2023 shortfall and on joint marketing. It should go further on pipeline regulation, and it should implement a windfall profit tax to avoid catastrophic consequences for Australian gas users. References^ has accepted (www.minister.industry.gov.au)^ Australian Domestic Gas Security Mechanism (www.industry.gov.au)^ half-yearly report (www.accc.gov.au)^ Competition and Consumer Commission (www.accc.gov.au)^ Australian Domestic Gas Security Mechanism (www.industry.gov.au)^ The 'gas trigger' won't be enough to stop our energy crisis escalating. We need a domestic reservation policy (theconversation.com)^ agreement (www.industry.gov.au)^ Why did gas prices go from $10 a gigajoule to $800 a gigajoule? An expert on the energy crisis engulfing Australia (theconversation.com)^ domestic reservation policy (theconversation.com)^ sovereign risk (theconversation.com)Authors: Tony Wood, Program Director, Energy, Grattan Institute