Six out of every ten of the 2.24 million people set to be on JobKeeper in the December quarter are expected to be in Victoria, according to estimates issued by Treasurer Josh Frydenberg.

Looking ahead to the 2021 March quarter, Treasury estimates about 60% of 1.75 million expected to be on the scheme will be in the state which is currently under a hard lockdown. Parliament this week is set to extend the scheme, in a scaled down version, for six months from the end of September. 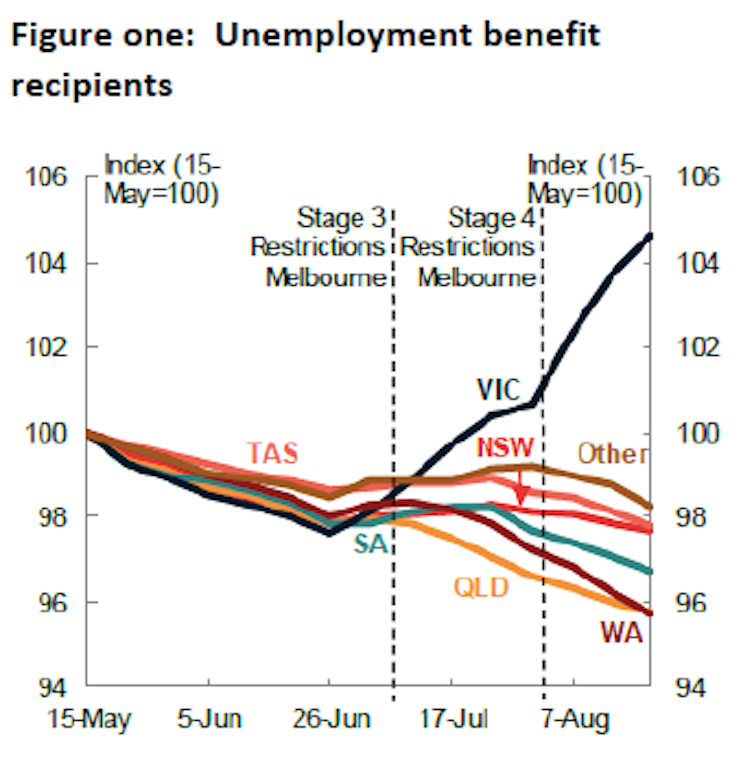 Treasury Releasing the Treasury analysis of data on spending from the Commonwealth Bank and unemployment benefits Frydenberg said: “Restrictions imposed by the Victorian government have had a devastating impact on the economy. "The number of Victorians on unemployment benefits has significantly increased with the impost of restrictions while numbers in other states have declined. "At the same time household spending in Victoria is down more than 30% through the year while the rest of Australia is only down around 3%. "The accommodation and hospitality sector has borne the brunt of the restrictions with the growth in spending in dining and takeaway down more than 60% and in the accommodation sector more than 80%. "In July the effective unemployment rate in Victoria, before the stage four lockdown, was around 10.5%, while it was around 8.5% in NSW where they are managing the virus and have reopened their economy.” Earlier Frydenberg, criticising Premier Daniel Andrews, told Sky, “I want to hear more about a message of hope for the people of Victoria. Daniel Andrews and the Victorian government need to be talking more about the road out than about a longer road in”. He attacked the “over-reach” and “very bad call” by Andrews in seeking a year’s extension of the state’s emergency powers legislation. This is now being negotiated with the Victorian upper house crossbenchers for a reduced length of time. 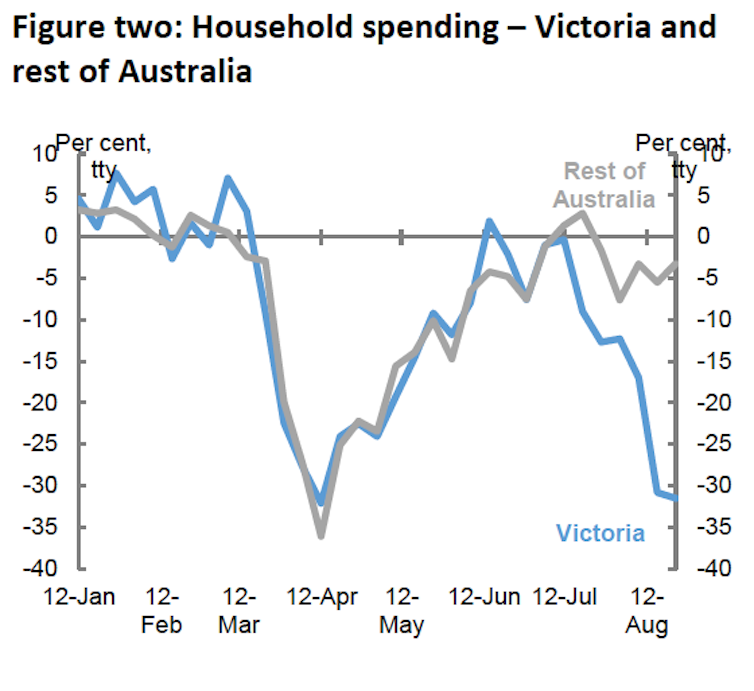 Treasury Frydenberg said there had been a “litany” of failures in Victoria. It was only a fortnight from the scheduled end of the stage 4 restrictions and “businesses are in the dark as to how they’ll get their workers back and their doors open,” he said. But with the latest Victorian tally of 114 new cases and 11 deaths, Andrews on Sunday said it was too early to put forward a definitive plan for reopening. The Treasury analysis shows that through May, as restrictions eased in Victoria, numbers on unemployment benefits fell and spending recovered, as elsewhere in the country. But since July Victoria’s story has been different from that of other states. Since late June Victorians on unemployment benefits rose by 27,600 (7.2%). More than half the increase was in the three weeks to August 21, when the stage 4 lockdown was operating. According to Treasury’s analysis of the Commonwealth Bank data, since the Victorian lockdown was reimposed, there has been a large fall in Victorian household spending growth relative to elsewhere. It has declined from about 0% through the year in mid-July, to be down about 30% through the year in recent weeks. In contrast, spending growth was 3% down over the year in the rest of the country. As with the initial lockdown, the reimposition of restrictions in Victoria led to a significant fall in discretionary spending growth - but the move to stage 4 hit spending harder. Growth in discretionary spending in the state was about minus 40% through the year in mid-April. As things eased it improved to about minus 5% through the year in mid-June. Then it has fallen to about minus 45% through the year in recent weeks. The metropolitan area has been harder hit than regional areas of Victoria. The number on unemployment benefits has risen by 7-8% across Melbourne since restrictions started to be reimposed, compared with 3% in regional Victoria. Over the same time, household spending growth across Melbourne and regional Victoria has fallen by similar amounts. But because of a limited recovery in this spending when restrictions were eased, through-the-year spending growth in Melbourne is presently about 24 percentage points below pre-COVID levels, while spending in regional areas is about 5 percentage points lower than before COVID. Frydenberg said more than $12 billion in JobKeeper payments and about $6 billion CashFlow Boost credits had been delivered to Victorian businesses and employees. Polling from the Australia Institute, a progressive think tank, done late last week found when people were asked which level of government was doing a better job handling the COVID crisis, 31% thought their state or territory government, compared to 25% who said the federal government, and 32% who thought both governments were doing an equally good job. Some 13% said they didn’t know or were not sure. 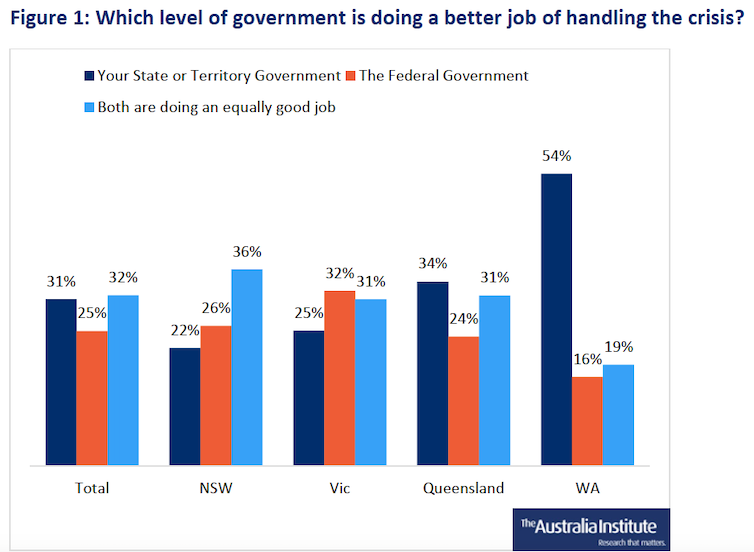 Australian Institute But in Victoria only 25% said the state government was doing a better job, compared with 32% who nominated the federal government and 31% who rated both governments equally.