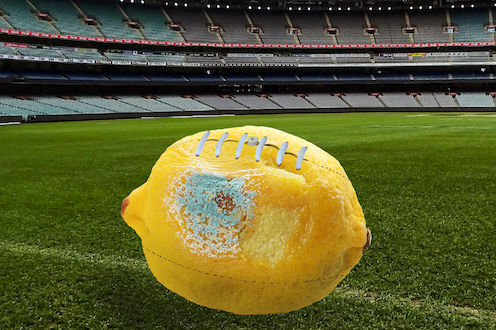 “One more”. In two words, the great Noongar-Wajuk Australian Rules footballer Lance Franklin indicated he would play on until at least 2023[1]. The statement “one more” also encapsulates the desire of the teams set to battle for the 2022 Australian Football League men’s (AFLM) premiership on Saturday. Geelong and Sydney, two powerhouses of the early 2000s, are each desperate for another flag after a number of close misses.

Unlike the supporters of both teams, the Australian Football League (AFL) will be hoping for a close compelling game with the outcome not known until the last few seconds. It is grand finals like Sydney versus West Coast in 2005, or Geelong versus St Kilda in 2009, that fuel the fever that drives the seemingly perpetual rise of the AFL.

In contrast to Franklin, 2022 is Gillon McLachlan’s final year at the AFL. The league’s CEO since 2014, McLachlan has deftly capitalised on the particular powers of sport. In an era where streaming companies have greatly reduced the sway of local TV channels, sport remains one of the few things most people still want to watch live. Those moments when it seems like nothing else matters have to be watched as they occur.

The recent $4.5 billion AFL TV rights deal[2] might be seen as McLachlan’s crowning achievement. From 2025 to 2031, the AFL’s TV partners will pay $643 million per year for the right to broadcast the men’s and women’s competitions.

Yet McLachlan’s broader legacy as the steward of Australian Rules football is more damning, especially when it comes to three central issues: Indigenous players, AFLW, and head injuries.

Gillon McLachlan has secured a massive TV rights deal for the AFL, but there have been key downsides to his tenure as CEO. James Ross/AAP

“One more” unfortunately also applies to the continuing stream of awful revelations of the racist treatment of Indigenous players during McLachlan’s time as CEO. The racist booing of the Adnyamathanha and Narungga man and dual Brownlow medallist Adam Goodes began at the end of McLachlan’s first year in charge, and continued unabated during 2015, driving Goodes from the game[3]. After refusing to condemn the booing while it was occurring, McLachlan and the AFL eventually apologised and committed to[4] pro-actively ensuring no player would ever be so isolated and unsupported in the face of racist treatment.

Yet, at the same time, the league and its biggest club, Collingwood, were denying Afro-Brazilian Héritier Lumumba’s accounts[5] of the racist treatment he received. An eventual review found there was systemic racism at the Collingwood Football Club[6].

Belated apologies followed, as they did again this year to Eddie Betts (who is connected to the Gubrun and Wirangu/Kokatha Peoples) and others after Betts wrote about[7] the awful 2018 men’s pre-season training camp of the Adelaide Crows, which included racist activities.

And just this week there have been devastating allegations[8] that celebrated coaches Alastair Clarkson and Chris Fagan pressured young Indigenous players at Hawthorn to leave their partners and have their partners terminate their pregnancies.

The heartbreaking allegations resonate with Australia’s genocidal history[9]. But they also reflect its shameful present. The incarceration of Indigenous peoples[10] in places like Victoria continues to rise while children are being taken away[11] from Indigenous mothers at the highest rates since at least the Stolen Generations.

Despite its celebratory narratives of racial inclusion and anti-racist action[12], the AFL and its clubs remain institutions that seek to possess Indigenous peoples and their land[13], rather than recognise and support their sovereignty.

It remains an indictment of McLachlan’s tenure that the white leadership of the AFL has never enacted a broad review[15] of systemic racism throughout the league. He has also failed to institute a forum for truth-telling with a commitment to implement structural changes to redress its long, racist history.

The failures of the white leadership of the AFL to consider Indigenous peoples were once again on display when the first game of the AFLW’s Indigenous round began with a minute’s silence for the death of the queen who upheld, as well as symbolised, the genocidal colonisation of the lands that make up Australia.

The AFLW must be paid more than lip service

Like its relationship to Indigenous Australians, the league’s purported commitment to women’s football remains more symbolic than grounded in actions[16]. While McLachlan deserves credit for accelerating the development[17] of an elite national competition for women, as soon as the AFLW was launched in 2017 it became something of an afterthought to the league.

Indeed, the following year the AFL turned its attention instead to launching the men’s AFLX competition, redistributing most of the AFLW’s marketing budget[18] to this shiny new gimmick. While the ill-advised AFLX lasted only two seasons, it not only distracted from the women’s competition when it was most in need of support, it also highlighted the disparity in how the AFL viewed the labour of the women and men who played the game. In 2019, for example, the four male captains of the AFLX sides each received more money[19] for two weekends of work than the combined salaries of each AFLW side for the whole season.

The start of the AFLW’s seventh season amid the men’s finals has highlighted the jarring disjunctions between the two leagues. Despite many compelling contests, the resources that the league and its media partners invest in covering the men dwarfs that of the women.

AFLW games have often been scheduled at inconvenient times (such as 5.10pm on Fridays), so as not to clash with the men. None of the innumerable footy TV talk shows focus on the women’s game. AFLW games have fewer camera angles, no capacity for reviewing scores, and broadcasts end almost as soon as the games are over.

Pay parity continues to be a pressing issue for the AFLW. Hamish Blair/AAP

The superb AFLW season 6 documentary series[20], Fearless, shows how things can be different. Using laudably high production values, it provides a gripping insight into the highly skilled teams and athletes of the AFLW competition. Yet those who run the AFLW are still yet to provide a clear plan for its development to either the public or the clubs themselves.

The huge new TV rights deal provides more than enough funds to make the AFLW fully professional. Yet recent history makes it hard to trust the AFL will do this well or in a timely fashion.

Read more: The AFL has consistently put the women's game second. Is it the best organisation to run AFLW?[21]

Turning a blind eye to head injuries and their devastating impact

Under McLachlan, the AFL has also failed to adequately deal with perhaps the greatest threat to the viability of both the AFLW and AFLM competitions. Head injuries and their devastating legacies remain a persistent issue.

Early in McLachlan’s tenure, the AFL’s medical advisory board made the confounding argument that concussions suffered[22] in Australian Rules football were somehow different from those suffered in American football. More recently, they have hindered research[23] into head injuries suffered by AFL players.

Geelong’s captain in Saturday’s grand final – Joel Selwood – is famous for, among other things, having developed a method of winning free kicks by inducing head-high tackles. Despite some attempts, the AFL has been unable to stop players wilfully harming themselves to gain an advantage in this manner.

A key limitation here is the league’s refusal to move to full-time professional umpires for its billion-dollar industry. In a further embarrassment to McLachlan[24], the 2022 Brownlow medallist, Patrick Cripps, was only eligible for the award because the AFL appeals board decided his head-high bump that concussed Callum Ah Chee did not merit a suspension.

Lance Franklin’s extraordinary combination of talent and hard work over more than a decade exemplifies the spectacle that continues to lead so many people to watch the game.

There is a significant chance that in Saturday’s grand final Franklin will do something that seems to transcend human possibility, creating the kind of must-watch moment that powers live sport.

Yet the incoming AFL CEO from 2023 faces considerable challenges to make AFL a safe space in which all Indigenous people can thrive without systemic racism, to fully realise the glorious potential of AFLW, and to make the game safe for all of those who play it.