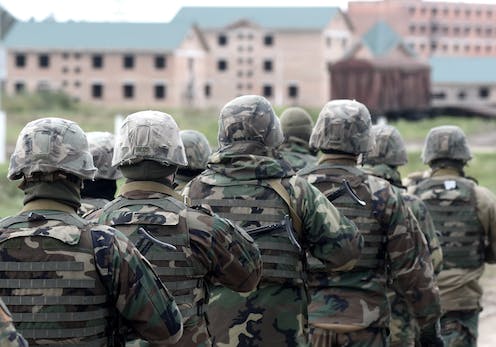 There’s a long history and growing evidence base[1] that the use of performance enhancing drugs such as anabolic-androgenic steroids to build muscle mass and strength is common in the armed forces, including in Australia.

This isn’t surprising considering the pressures soldiers face to complete missions successfully, achieve elite levels of fitness, and deal with the physical and mental stresses of their profession.

The Australian Defence Force (ADF) is also constantly looking for ways to amplify the performance of soldiers, which includes the consideration of technologies[2] both “in” (such as drugs) and “on” (for example exoskeletons) soldiers.

In 2016, the Department of Defence also created the Human Performance Research Network[3], which is focused on enhancing the physical and cognitive performance of military personnel.

At the same time, the ADF has adopted[4] parts of the World Anti-Doping Code – a code developed to govern drug use in sport – to manage the governance of human enhancing drugs within the military. Under the code, using steroids isn’t allowed.

But considering the military is constantly looking for means to create “super soldiers”, should we consider allowing the use of steroids and other enhancement drugs?

The answer to this question isn’t clear cut. But there’s no reason to believe the use of enhancement drugs such as steroids by soldiers is, in and of itself, unethical.

Are the ethics of using steroids on the battlefield the same as those in sport?

In sport, critics of drug use are concerned with the integrity of the contest. Many consider a level playing field in sport to be an essential element of the fairness of a contest.

The thought that one side in a battle shouldn’t employ technologies unavailable to their opponents is irrelevant to the conduct of war.

Two things matter for the integrity of a military conflict, according to traditional “just war theory”. Firstly, that the cause is just, or fair. Within just war theory, self-defence is generally regarded as one such just cause.

And second, that the means employed to wage war discriminate between innocents and genuine combatants, and are proportionate.

The use of performance enhancing drugs therefore does not, as such, affect whether a war is fair, at least according to the just war theory.

The use of steroids is a serious issue when considering the health of soldiers. There’s evidence people who use steroids have a higher risk of various physical and psychological harms[6], including cardiovascular disease and steroid dependence.

However, there are several issues with using such a simple dichotomy. First of all, life is generally full of risks, and simply avoiding them would mean we would live very sheltered and restricted lives.

Second, it has been well-established that many people use illicit drugs (including steroids) for pleasurable[7] and functional[8] reasons without necessarily experiencing serious harms. For these people, the benefits of using illicit substances outweigh their potential harms.

The benefits of steroids[9] are obvious. Their use is associated with an increase in muscle strength and mass, reduced risk of injuries, and quicker recovery from injuries.

The use of battlefield medicine and technological developments (such as armour) have long sought to protect the physical and mental health of soldiers. For example, the prescription drug Modafinil, a drug licensed for the treatment of narcolepsy, is approved for use[10] by the Republic of Singapore Air Force, and has been tested for military application in both the US and the UK.

Individuals who are sleep deprived have decreased psychological and physical capabilities. Soldiers often operate over long hours and are deprived of sleep. So using stimulants like Modafinil[11] can support maintaining alertness, cognitive function, judgement, and situation awareness in sleep-deprived soldiers.

In a similar manner, steroids could potentially prove useful in protecting the bodies of soldiers.

Read more: Doping soldiers so they fight better – is it ethical?[12]

Having said this, special consideration needs to be given to the link between steroid use and aggression.

A study[13] published in 2021 provides evidence of an increase, although small, in self-reported aggression in healthy males following steroid use. However, the relationship between aggression and steroid use is complex, and there are generally other mediating factors (such as other substance use and personality traits).

Regardless, the fact that steroid use may increase aggression when split-second decisions are required on the battlefield can be morally significant given these are often matters of life and death.

On the one hand, steroid use is a matter of personal and individual choice.

But on the other, there are tremendous social and cultural pressures to perform and succeed.

Competitive environments particularly, such as the military, have the potential to become highly stressful. As such, soldiers might well feel coerced by their peers and their superiors to undertake bodily or performance enhancement.

If steroids were to be allowed in the military, this would require informed consent.

But considering these pressures, satisfying the requirements of voluntary and informed consent for the use of illicit enhancement drugs within the military might well be challenging.

Such consent will often be undermined due to the pressures on soldiers to perform and succeed within the military.

Not unethical, but studies needed

There’s no reason to believe the use of enhancement drugs such as steroids is, in and of itself, unethical.

But there are concerns, such as the long-term health of soldiers, and any possible effects these drugs might have upon the behaviour of soldiers when in combat situations and when they return to society.

What’s required are robust empirical studies to determine the extent of the dangers.

Our list of such concerns isn’t intended to be exhaustive, but rather represents a list of issues that need to be addressed when developing any regulatory frameworks for the use of enhancement drugs in a military context.