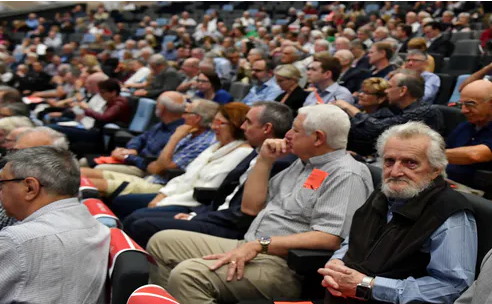 Treasurer Josh Frydenberg appears to have backed down.

An extraordinarily rushed timetable that would have allowed investors and others just 12 days to comment on draft legislation permitting companies to hold virtual rather than face-to-face annual general meetings has been extended by seven days[1], to the end of this week.

And Frydenberg has suggested he no longer supports it. He now says[2] “reforms to the regulation of AGMs should enhance the ability of shareholders to interact with the board, not diminish it”.

The idea took hold when it became apparent COVID-19 would stop companies being able to hold physical meetings of shareholders.

In May the federal government announced a six-month temporary[3] relaxation of the Corporations Act rules to allow companies to hold online shareholder meetings.

In 2020 Westpac's AGM will be virtual[5] Temporary relief was to become permanent Then, in a surprising development two weeks ago (on October 19), the federal government published draft legislation[6] to permanently allow companies to hold virtual-only shareholder meetings, including annual general meetings. The reaction was caustic. There are two main criticisms. One is focused on the process adopted by the government. The other is focused on the proposal itself. The process was undoubtedly flawed. Twelve days — in the midst of the AGM season — is an exceptionally short amount of time to consider such important reform. The more fundamental criticisms relate to what’s proposed. We believe it will undermine the role of shareholder meetings in making company directors answer to shareholders. Shorter questions, fewer questions There is evidence this has already been happening. At some AGMs, shareholders’ questions have been ignored[7]. Others meetings have been much shorter[8]. The Australian Shareholders’ Association says a good AGM is an opportunity for healthy discussion[9] and exchange of information and views. In contrast, a virtual meeting “is a sterile format where companies are able to ignore questions, and gloss over details”. Read more: Australia is ripe for shareholder activism[10] In the US, the Council of Institutional Investors (representing institutional investors with more than US$45 trillion under management) has complained[11] to the US Securities and Exchange Commission about the virtual meetings held because of COVID-19 — calling them a “poor substitute for in-person shareholder meetings” that placed obstacles in the path of shareholders wanting to participate in a meaningful way. Hard evidence is emerging A study[12] published in August about virtual shareholder meetings during COVID-19 supports these concerns. Research by Miriam Schwartz-Ziv examined the transcripts and audio recordings for 94 US corporations that held an in-person or predominately in-person meeting last year and a virtual meeting this year. Read more: What limits shareholder activism as a force for good: the free-rider problem[13] The move to virtual meetings shortened the average meeting by 18%, decreased the time dedicated to providing a business update by 40%, and decreased the average time spent on answering questions by 14%. Schwartz-Ziv says these findings: may suggest that not having visibly present shareholders, and perhaps not observing shareholders’ responses throughout the meeting, ultimately leads to less information communicated by the company to the shareholders Among the tactics used were company officials incorrectly stating there were no more questions and limiting questions to resolutions being voted on. Shareholders are increasingly active Right now shareholders are more active than ever, using AGMs to put matters such as climate change on the agenda. This year’s Woodside Petroleum AGM[14] made history when, for the first time in a major Australian listed company, a shareholder resolution requesting the company take action on climate change received more than 50% support from shareholders, even though the resolution was opposed by the company’s directors. This type of activism, which is occurring in more companies, can indeed present challenges for directors who oppose the wishes of shareholders. Some of them might welcome an opportunity to limit questions. There’s no rush But that’s no reason for the government to facilitate it. The government’s proposal was rushed and poorly justified. It would be better to debate the merits of permanently allowing what are called “hybrid[15]” AGMs. This would involve a physical meeting along with online facilities for those who can’t be physically present. Read more: How Westpac is alleged to have broken anti-money laundering laws 23 million times[16] This year’s AGM season will give us enough experience with virtual shareholder meetings to allow a more informed decision on their merits during 2021. There’s plenty of time.