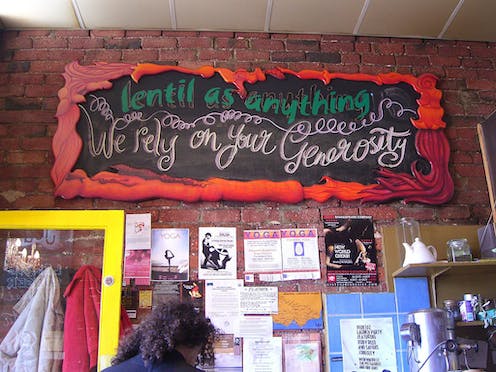 The last couple of years has seen the rise of restaurants[1], museums[2] and other businesses allowing customers to pay as they want. There may be altruistic reasons for companies to adopt this pricing, but research shows that “pay what you want” pricing can sometimes lead to an increase in revenue[3].

Adopting pay what you want does increase the risk for businesses, as customers can easily pay nothing, or less than the seller’s costs. However, the fact that most customers still pay significantly more than zero[4], and that revenue can actually increase, shows people make purchase decisions for many reasons, including a perception of fairness.

Businesses can use several strategies to increase revenue, such as posting signs with suggested prices, or donating money to charity.

Research on pay what you want is mixed[6]. One study[7] tracking a pay-what-you-want restaurant over two years found that the average meal payment decreased but the number of daily guests increased, which meant total revenue increased.

However, in other cases, pay what you want did not provide an increase in revenue. A recent example is the closure last year of the Footscray Lentils as Anything restaurant[8].

In general, pay what you want is most effective in low-competition marketplaces[9].

The rock band Radiohead famously used pay what you want[10] to sell one of its albums online. New York’s Metropolitan Museum of Art used a pay-as-you-wish admission policy[11] for 50 years. Wikipedia[12] also uses a pay-what-you-want model to fund itself.

Why pay as you want can be profitable

There are a few reasons why pay as you want could be profitable[13].

Pay as you want allows for price discrimination[14]. Normally this means companies try to extract the most a customer would be willing to pay by offering different services, such as extra legroom on planes, for example.

By allowing people to pay as they want the restaurant can successfully cater to both types of customers.

Pay as you want can also be used to undercut the competition. While a competitor has posted its prices in a menu or on a website, customers can always pay less at the pay-as-you-want business. This can not only increase the number of customers to the pay as you want business, but could drive competitors out of the market.

In that sense, pay as you want lends itself to businesses that want to sell as many products as possible – they are appealing to all price points and are technically the cheapest option.

Why do people pay more than zero?

If a customer was perfectly rational then they would always pay zero to a pay-a-you-want business.

But research shows that most people are inherently pro-social[15], meaning they engage in altruistic actions that have no direct benefits to themselves.

Paying more than zero is also a “signal[16]” to others that we are fair. Paying zero for a product that obviously cost the seller something to produce would make the customer appear unreasonable to those around them, which would violate their self-image as a good person[17].

A customer may value the product enough[18] that they want to help the seller stay in business. After all, if no one pays then a seller will close down and the customer will lose access to the product.

Lentil as Anything – Social Return on Investment Report.

For a pay-as-you-want strategy to be effective, customers must perceive[19] the product to be of good quality and have high satisfaction with the transaction. Beyond this basic necessity sellers can employ numerous strategies to increase revenue.

Customers pay more[20] when provided with a reasonable suggested price. A seller may put up a sign saying “a meal like ours would cost you $20 next door”, for example. A suggested price serves to anchor customer’s expectations and helps make clear what might otherwise be a confusing situation at the till.

Customers will also pay more[21] when provided with information about “socially correct” behaviour. For example, a seller may put up a sign indicating that “90% of people pay more than the cost price of our meals”. This kind of information helps customers understand what behaviour is considered normal and expected.

Customers also pay more[22] when a portion of their payment is directed to charity. Charity donation provides customers with a “warm glow” feeling and presents the seller as socially responsible.

The next time you are buying a product, reflect on what you would pay if free to choose. It might be higher than you think.