It would be nice if the “facts” being thrown around in the debate over the Cashless Debit Card were peer-reviewed, or even just evidence-based.

Instead, there are anecdotes[1]. And it’s these that are being used to justify the government’s decision to spend A$128.8 million[2] over four years continuing the existing trial of the cashless debit card in five sites in Western Australia, Queensland and South Australia and extending it to Cape York and all of the Northern Territory.

The extension will lift the number of people on the card from 11,000 to 33,000. Most will be Indigenous people - its disproportionate targeting has already attracted the attention of the National Congress of Australia’s First Peoples and the Human Rights Commission[3].

The cashless card was recommended to Prime Minister Tony Abbott in a report[4] from mining billionaire Andrew Forrest in 2014. He initially called it the “Healthy Welfare Card[5]”.

It wasn’t a new idea. Some A$1 billion dollars had already been spent on income management programs in the past, many of which had failed to meet their stated objectives[6].

It’s been tried before 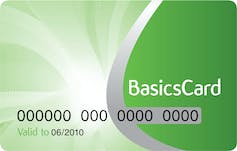 The biggest was the Basics Card introduced as part of the 2007 Northern Territory Emergency Response (the “Intervention[8]”) which was only made possible through the suspension of the Racial Discrimination Act.

Research published by the Australian Research Council funded Life Course[9] Centre of Excellence found its introduction was correlated with negative impacts on children, including reductions in birth weight[10] and school attendance[11].

It points to several possible explanations, including increased stress on mothers, disrupted financial arrangements within households, and confusion about how to access funds.

The government has not addressed these serious issues. Instead, it now seeks to place those who have been left on the basics card for over ten years now, on to the cashless debit card.

What was ‘Basics’ has become ‘Indue’

The “Indue” Cashless Debit Card trials underway since 2016 direct 80% of each payment to the card (Forrest asked for 100%[12]) where it can only be spent on things such as food, clothes, health items and hygiene products. Purchases of alcohol and withdrawals of cash are not permitted.

The trials are compulsorily for everyone living in the trial sites receiving a disability, parenting, carer, unemployment or youth allowance payment.

My own research in the East Kimberley found it makes those people’s lives harder[13].

Those targeted are a broad group needing support for a broad range of reasons, yet all are treated as if they have issues with alcohol or drugs or gambling.

Most of the people on it do indeed have a common problem: that is trying to survive on meagre payments in remote environments with a chronically low supply of jobs.

Read more: 'An insult' – politicians sing the praises of the cashless welfare card, but those forced to use it disagree[14]

Of all the claims made for the card, the least believable is that it gets its users into jobs.

What it does do is limit access to cash needed for day to day-to-day living. It makes it hard to buy second-hand goods, transport and (at some outlets) food, and can make living more expensive.

For anyone actually struggling with addiction, it can’t substitute for drug addiction rehab treatment, a concern raised by medical specialists.

While the government says the trials have been community-led, in reality consultation has been limited to a small group of people not subject to the card.

When leaders in the East Kimberley who had agreed to the card withdrew their support[15], the government continued with the trial.

Its success has not been established

In addition to relaying on anecdotes, the government continues to cite a widely condemned report[16] by Orima Research[17]. Among others, the Australian National Audit Office found this report was inadequate[18] to draw any conclusions from.

Profiting from the Cashless Debit Card has been Indue[19], a private company whose deputy chairman[20] up until 2013 is now the present President of the National Party, Larry Anthony.

Read more: The Cashless Debit Card Trial is working and it is vital – here's why[21]

Indue’s involvement is helping to create a two tiered banking system[22] in which most people have a choice of financial providers, but those subject to the card are restricted to one, which provides a very different product to the others.

Indue is also not a member of the Australian Banking Association, and so is not bound by the consumer protection provisions of its Banking Code of Practice[23].

The inquiry is due to report next week[24]. Given the expensive and harmful consequences of the trial, it ought to find the extension is not justified. There are better ways to spend $128.8 million that would actually help vulnerable Australians.