Today, Mardi Gras is framed, at least in part, within a global gay and lesbian tourism industry that craves a bigger and better parade each year. It’s unlikely that any of the heroic individuals caught up in the brutal riot on the night of 24 June, 1978[1] would have had much of an inkling that Mardi Gras would become one of the world’s most spectacular and enduring gay pride parades.

Nor would they have likely imagined that the parade and the festival would attract thousands of tourists from across Australia and the world making it one of the most attended annually occurring special events in the country.

In the late 1970s gays and lesbians were a marginalised and oppressed community struggling for law reform and social acceptance. We were still a decade or so away from becoming a recognisable market segment[3] to be strategically targeted by companies selling top-shelf alcohol, boutique holidays and hair remover.

In 1999, Sydney Gay and Lesbian Mardi Gras Ltd, which was the entity organising the festival at the time, launched its own gay and lesbian travel agency - Mardi Gras Travel. This development, although short lived, nevertheless strengthened the sometimes contradictory connection between Mardi Gras as a grassroots community festival and the tourism industry with its overtly commercial preoccupations.

The United Nations World Tourism Organisation report on LGBT tourism[5] describes the market as robust and resilient, comprising relatively cashed up consumers with deep pockets and a strong desire to travel. And who like to party.

These hallmark events and festivals are powerful drivers for LGBT tourism[7]. LGBT destinations are linked globally by an extensive calendar that includes more than 1,000 pride events, film festivals, circuit-parties, International Gay Games, and the Gay Day phenomenon[8]. This is where gays, lesbians and their friends descend on theme parks, the largest being GayDayS Orlando which is now a seven day “vacation experience” attracting about 180,000 participants[9].

Festivals and events can also be significant tools in regional economic and community development. If intelligently managed, festivals attract substantial[10] numbers of LGBT tourists to regional and rural destinations, injecting additional income into the local economies.

Read more: Sustainable shopping: take the 'litter' out of glitter[11]

The success of Mardi Gras as a distinctly Australian LGBT festival has spawned similar, if smaller festivals, in most of Australia’s capital cities and a range of regional areas as well.

LGBT festivals of varying scales now take place in Daylesford[12], Cairns[13], Alice Springs[14], Hunter Valley[15], and Lismore[16]. The newest of these is the Broken Heel Festival[17], a homage to the film, Priscilla, Queen of the Desert, hosted in Broken Hill. In fact, it seems almost all tourist accommodation has already sold out[18] there for early September, when the Heel festival occurs. 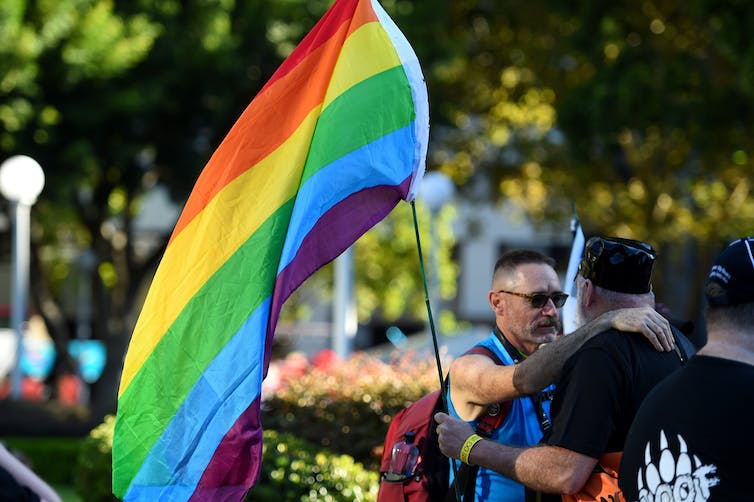 The growth of peer-to-peer accommodation platforms, such as Airbnb, and the gay men’s equivalent, Mrbnb[19], diversify accommodation options, further increasing the appeal of these regional places to LGBT travellers.

For the past 40 years, the Sydney Gay and Lesbian Mardi Gras Parade has meandered its glittering way up Oxford Street, Sydney, captivating the thousands of onlookers lining the route. Simultaneously, defiant and celebratory, the parade and the festival that has grown up around it have been pivotal in shaping and reshaping relationships between the LGBTQI community and the broader Australian community.

The demonstration of Mardi Gras, and of LGBT tourism, to contribute significantly to the nation’s economy I think has been a useful strategy to advance social and political “acceptance” of the LGBT community. But Mardi Gras contributes far beyond economic benefit and the social, cultural and political impacts have been profoundly important in the construction of LGBT identities in Australia.