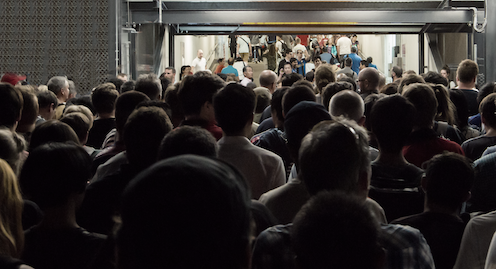 And at one time or another most have been told that their generation is better off (or worse off) than the ones that came before it.

It’s tempting to think the most recent generation is always the worst off, with all the talk about the cost of living and other things in election campaigns.

But without data, or living the lives of other generations, it is hard to be sure.

For most of the dimensions of well-being in which we are interested, the questions turn out to be surprisingly easy to answer, so long as we remember that the data tells us a lot about lives on average, and little about the lives of individuals.

In a study[1] prepared for the Australian National University’s Tax and Transfer Policy Institute I’ve attempted to provide answers for nine dimensions of well-being, used by the OECD, comparisons, ranging from income to housing, to personal safety to inequality.

Income and wealth ✅ Net national disposable income per capita has been climbing over time, meaning that Millennials aged 25-35 are 51% better off than Generation Xers were at that age, and 91% better off than Boomers at that age. And those figures are likely to understate how much better off their standard of living is. The quality and range of goods and services from food to cars to healthcare to computers to mobile phones with cameras has improved in ways figures can’t capture. Many didn’t exist in the 1970s. Although the Bureau of Statistics attempts to adjust its measures for improvements in quality, it concedes its efforts are incomplete. The Bureau’s underestimation of quality improvements is likely to be significant. Millennials are also wealthier than Gen Xers and Boomers were at the same age, although recently the wealth of older Australians has been climbing more rapidly than the wealth of younger Australians, due in large measure to home prices. Offsetting this, in due course, should be big inheritances passed from Boomers to Gen-Xers and Millennials.

Housing ❌ Millennials aged 25 to 34 are much less likely to own their homes than Boomers were at the same age. Among those aged 25-34, home ownership has fallen from 60% in 1976 to 37% in 2017-18. While much of this is due to prohibitively high prices, some is due to Millennials finishing education and entering the workforce and marrying later. It should be noted that Millennials who do own a home are no worse off in terms of payments relative to income than were Boomers. But getting a deposit (unless there’s an offer from the bank of mum and dad[2]) has become much more difficult. Private rents have been remarkably constant over the past 25 years, at about 18% of average household income. Rents for low earners (in the bottom fifth) remain extraordinarily high, in Sydney taking up about 30% of household income. But this isn’t a generational problem. Low earners’ rents have been high and stable as a share of income for decades. What is a problem for the most disadvantaged is that public housing has slid from 5.8% of the housing stock in the late 1990s to about 3% today.

Work ✅ Women are much more likely to be in paid employment than 40 years ago. Whereas in 1978, when Boomers were aged 25-35, only 40% of women were in paid work, by 2018 when Millennials were that age, a record 57% were paid workers, a proportion that climbed even higher during COVID to an unprecedented 60%. Men are less likely to be employed. Whereas in 1978, 75% of men were paid workers, male employment fell to 67% in 1998 when Gen-Xers were 25-35, and stayed there when Millennials were that age in 2018. And there has been a major shift from blue-collar to white collar work. As detailed in the Intergenerational Report[3], in 1966, machinery operators and drivers comprised 11% of the workforce, and technicians and tradespeople 21%. By 2016 these proportions had almost halved to 6% and 14%. The share of the workforce employed in (generally less physically-demanding) professional jobs has doubled, while the share employed in personal service jobs nearly tripled. Arguably these changes mean more pleasant working conditions. Read more: Five questions (and answers) about casual employment[4] Work is also more part-time - the proportion of the workforce employed part-time has doubled, climbing from 15% in 1978 to 30% – and more casual. In 1988 only 19%[5] of the workforce was employed in jobs without leave entitlements. By 1998 the proportion had climbed to 27%, and has since declined to 22.5%.

Health ✅❌ Australians are taller and heavier than half a century ago, in part because of better nutrition. But we are more obese. Between 2007-08 and 2014-15 the proportion of children defined as overweight and obese women has climbed from 24.7% to 26.4% Despite this, the extra years of life expected by men who reach 65 have climbed dramatically, from 12.3 years for a boomer born in 1953-54, to 19.6 for a Millennial born in 1994-96, to 22.3 for a man born more recently. The extra years of life for a woman at age 65 has climbed from 15 to 19.6 to 22.3. Importantly, the Institute of Health and Welfare finds most of the additional years are healthy years[6], with the proportion of lives spent in ill health little changed. Suicide rates have fallen for women (from 7.8 per 100,000 females in the 1970s to 5.7 in the 2010s) but not for men (where they remained at about 18 per 100,000). On the other hand, both men and women experienced major increases in reported anxiety and mood disorders, with the proportion of women reporting anxiety climbing from 12% to 16% between 1997 and 2017, and the proportion of men climbing from 7% to 11%. But harmful alcohol use and illicit drug use fell.

Education ✅ Millennials are much more educated (in terms of post-school qualifications) than Bsaby Boomers or Generation X. Between 1975 and 2016 the proportion of men with a tertiary qualification climbed from less than 4% to 20% and the proportion of women with a tertiary qualification from less than 2% to 24%. The benefits for those with degrees go beyond the financial. The Household, Income and Labour Dynamics survey finds they extend to well-being, social interactivity and healthy behaviours, such as physical activity and abstaining from drinking and smoking.

Safety ✅❌ Between 1996 and 2016 victims of homicide and related offences fell 50%, victims of robbery fell 56%, victims of motor vehicle theft fell 65% and victims of other theft fell by 21%. Reported sexual assaults moved in the opposite direction, climbing from 80 per 100,000 people in 1996 to 95 in 2016. Driving on roads has become far safer. Between 1976 and 2016 road deaths per 100,000 people fell from 25.5 to 5.3. Overseas, far more Australians (many of them conscripts) died in the Vietnam war than in Afghanistan, making the toll from overseas conflicts the greatest for Boomers, much less for Millennials and nonexistent for Generation Xers.

Loneliness and connections ❌ The proportion of Australians actively engaged in community organisations fell from 33% in 1967 to 18% in 200, with major declines in church attendance, membership of unions and political parties, and participation in organised sport. Whereas in the Boomer year of 1984, Australians had an average of nine trusted friends each, by the Gen-X year of 2018 that number had fallen to five. In 1984, people could drop in on 10 neighbours. By 2018, it was only four. Seventeen percent of people who could not drop in on a single neighbour in 1984. By 2018 it had climbed to 17%[7]. Offsetting this to some extent is evidence of substantial volunteer work in the recent floods and bushfires, social support services that did not exist 20 or 30 years ago, and the increasing use of online communication.

Environment ❌ The US National Aeronautics and Space Administration finds the past seven years have been the hottest in recorded history[8]. The CSIRO finds that Australia’s climate has warmed on average by 1.44°C[9] since national records began in 1910, and the Intergovernmental Panel for Climate Change expects Australia to suffer more from longer and hotter summers and more frequent bush fires than the rest of the world. More than 1,700 [10]Australian species and ecological communities face extinction. Only partially offsetting this for Millennials are less air and water pollution than in the 1970s, less water use[11], and better building standards.

Inequality ❌ While the economy Millennials entered their 20s and 30s is richer than in earlier generations, its wealth and income are less equally distributed. The Productivity Commission finds income inequality has increased “modestly” since the 1980s and wealth inequality by more. Between 2003-04 and 2015-16 the wealth of the poorest tenth of households climbed not at all, while the wealth of middle-earners climbed 27%, and the wealth of the top tenth by nearly 40%[12], largely due to growing superannuation balances and home prices. Read more: Intergenerational reports ought to spark action, as well as scare us[13] Assessing the overall position of Millennial voters compared to Gen-X and Baby Boomer voters requires value judgements about the dimensions that matter the most, and also judgements about the future, including the ways in which Australia will buffeted by and respond to potential major threats including climate change, social media and the erosion of privacy, and conventional and cyber warfare. Peter Abelson wishes to acknowledge the assistance of Aliya Gul, a millennial. References^ study (taxpolicy.crawford.anu.edu.au)^ bank of mum and dad (www.abc.net.au)^ Intergenerational Report (treasury.gov.au)^ Five questions (and answers) about casual employment (theconversation.com)^ 19% (www.abs.gov.au)^ healthy years (www.aihw.gov.au)^ 17% (www.blackincbooks.com.au)^ the hottest in recorded history (www.washingtonpost.com)^ 1.44°C (www.csiro.au)^ 1,700 (www.awe.gov.au)^ less water use (www.abs.gov.au)^ 40% (www.pc.gov.au)^ Intergenerational reports ought to spark action, as well as scare us (theconversation.com)Authors: Peter Abelson, Economist, Crawford School of Public Policy, Australian National University