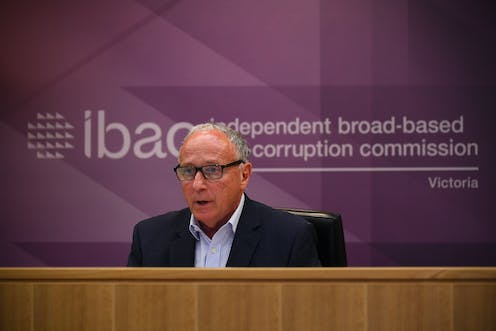 This follows news Victorian Premier Daniel Andrews is being questioned[3] by the Victorian Independent Broad‑based Anti‑corruption Commission (IBAC) over his dealings with the firefighters union (Andrews says he has behaved “appropriately”).

It also comes as New South Wales Premier Gladys Berejiklian sensationally fell on her sword[4] last month. She resigned after revelations the NSW Independent Commission Against Corruption (ICAC) was investigating whether there was a conflict between her public duties and private interests, which she denies.

This has all further heated up the debate about the proposed federal integrity commission[5]. The Morrison government is expected to introduce legislation establishing the Commonwealth commission by the end of the year. But its proposed model has been criticised as being too weak[6].

So, what are these anti-corruption commissions? And what are differences between ICAC in NSW and IBAC in Victoria?

What are anti-corruption commissions?

Anti-corruption commissions investigate corruption in government. They can be given strong coercive powers to do so, including the power to compel documents and witnesses.

ICAC was established in NSW in 1988 by then premier Nick Greiner. A few years later, Greiner became the first premier to resign[7] due to an ICAC investigation. Victoria’s IBAC was set up in 2012 following an election commitment by the Baillieu Coalition government (who made the pledge during opposition).

There are three main differences between IBAC and ICAC – jurisdiction, power and procedures.

When IBAC was set up, it was criticised[8] by prominent former judges at the Accountability Roundtable as a “toothless tiger,” given the high threshold of what it could investigate – it must be “serious corrupt conduct” before an investigation can start.

We should note here, the investigation threshold for the proposed Commonwealth Integrity Commission is even higher, requiring a reasonable suspicion of corruption amounting to a criminal offence before an inquiry can even begin. This is a difficult hurdle to clear.

Read more: A federal ICAC must end the confusion between integrity questions and corruption[9]

The Andrews government increased[10] the jurisdiction of IBAC in 2016, removing the requirement for corrupt conduct to be “serious”, and adding the ability to investigate misconduct in public office.

But IBAC’s jurisdiction remains more limited[11] than ICAC’s, which has broad powers to investigate any allegation upon suspicion of corruption. This includes alleged substantial breaches of the ministerial and MP codes of conduct.

Read more: As a NSW premier falls and SA guts its anti-corruption commission, what are the lessons for integrity bodies in Australia?[13]

Finally, ICAC holds public hearings[14] as a matter of course. But IBAC can only hold public hearings in exceptional circumstances and when it is in the public interest to do so.

In short, ICAC is a more powerful commission than IBAC.

Who watches the watchdogs?

A big question is about how we ensure anti-corruption commissions do not overstep their bounds. Given their broad coercive powers, how do we hold them to account?

In Australia, anti-corruption commissions are subject to a strong system of accountability through parliaments and the courts.

Daniel Andrews says he will not stand down over news IBAC is looking at his dealings with the firefighters union. James Ross/AAP

Where the anti-corruption commissions go beyond the legal boundaries of their roles, the courts will police it. For example, in 2015, the High Court shut down an investigation against crown prosecutor, Margaret Cunneen. The court found ICAC[15] had no power to investigate allegations Cunneen had advised her son’s girlfriend to fake chest pains to avoid a breath test after a car crash. This is because Cunneen’s actions occurred when acting as a private citizen (not as crown prosecutor) – and so did not fit the definition of “corrupt conduct” in the NSW legislation.

So the idea that anti-corruption commissions are not accountable[16] is simply untrue.

Anti-corruption commissions like IBAC and ICAC tend to be unpopular within governments because they scrutinise government action and may expose improper conduct or corruption within their ranks.

It is regrettably common for governments hostile to anti-corruption commissions to attack them, including by reducing their powers[17] or funding[18].

Read more: ICAC is not a curse, and probity in government matters. The Australian media would do well to remember that[19]

In this vein, the latest barrage of criticisms[20] by politicians of ICAC following Berejiklian’s resignation is rather predictable. It is part of a broader pattern of attacks on oversight bodies that police government action.

This is despite their integral role in our democracy. Alongside other oversight bodies such as the ombudsman and auditor-general, anti-corruption commissions form part of an intricate, interlocking integrity framework that monitors executive action.

In this light, the design of the proposed Commonwealth Integrity Commission is fundamental. Australians deserve a robust system of accountability that will keep our politicians honest.