This week, a new Australian political biography will appear on bookshelves. This is The Accidental Prime Minister[1], an examination of Scott Morrison by journalist Annika Smethurst.

While a prime minister makes for an obvious – and worthy — biographical subject, it also continues Australia’s strong tradition of focusing on the stories of men in politics.

History as a discipline may have been grappling with gender issues since the 1970s, but political history has been especially resistant to questions about women and gender.

In a recent study[2] for the Australian Journal of Biography and History, I looked at Australian political biographies over the past decade. I found female political figures are almost always ignored.

Political biographies add life, colour and depth to historical events and personalities. They can shape the legacies of politicians long after they’ve left politics. They also show us who is worthy of being written about and who is overlooked in the pages of history.

However, most Australian political biographies have been written about men, particularly male prime ministers.

This inevitably calls to mind the enduring myth of the “Great Man” as the architect of historical change. This is best described by 19th century historian Thomas Carlyle, who believed “the history of the world is but the biography of great men”. 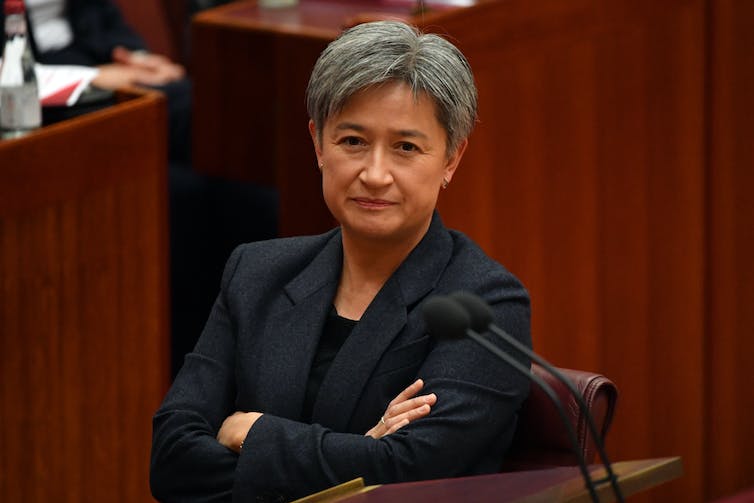 Labor senator and former finance minister Penny Wong is one of the few women MPs to be the subject of a recent biography. Mick Tsikas/AAP

As women were largely excluded from politics until the end of the 20th century, it could be argued they simply haven’t had the opportunity to be seen as “great politicians” worthy of literary examination.

Why are women ignored?

There are three key factors that can explain the lack of biographies written on Australian women politicians.

First, as previously noted, there is the lack of gender parity in Australian politics. The 1990s saw a surge of women enter politics, partly due to Labor’s gender quotas. Yet at the moment, only 31%[4] of the House of Representatives are women and all major leadership positions are held by men.

Read more: Why is it taking so long to achieve gender equality in parliament?[5]

Second, Australian political biography itself has a role to play here — the Great Man narrative is an enduring problem. It leads to an overemphasis on so-called “foundational patriarchs” and overlooks the impact of political players who don’t conform to this stereotype.

Third, women politicians might be more hesitant to expose their private lives to the same extent as their male counterparts. Women politicians frequently experience[6] sexist media coverage that often scrutinises their personal choices as a reflection of their professional capabilities. It is hardly shocking that they might be hesitant to cede agency over their own story and endorse an official biography.

So, there are several glaring omissions in Australian political biography. Where is the biography of our first woman prime minister, Julia Gillard? Former deputy prime minister Julie Bishop is another that comes to mind.

There is also pioneering former Labor minister Susan Ryan, who was pivotal in the passing of the Sex Discrimination Act, the Equal Employment Opportunity Act and the Affirmative Action Act. And Natasha Stott Despoja, the youngest woman to sit in the Australian parliament and former leader of the Australian Democrats.

Sisters must do it for themselves

So where are all the great women political figures? Well, they’re in the memoir section.

Through my research, since 2010, I found 12 autobiographies and memoirs have been published by women premiers, party leaders, federal and state MPs and senators, lord mayors and, of course, our first and only woman prime minister (though I also counted over 30 written by male politicians).

Autobiographies can be a valuable way for women politicians to recover their voices, reassert their agency and reclaim their public identity by telling their own life story.

An ambition to take charge of their public image is a common thread running through these books, usually paired with a desire to expose sexism. Gillard’s autobiography My Story, published in 2014 (the year after she left politics), is a notable example of this, holding her opponents and the media to account for their frequently sexist behaviour.

While it’s great women are using memoirs to voice their stories, we should not give up on conventional political biography. 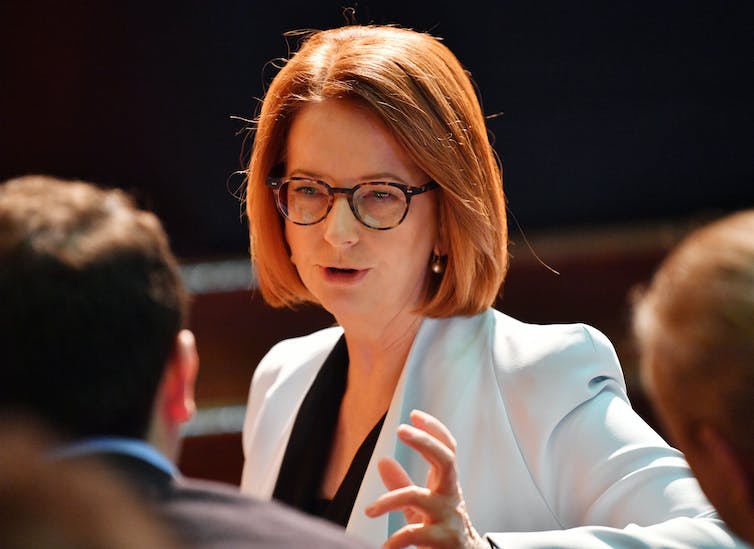 There is no definitive political biography of Julia Gillard. David Mariuz/AAP

As this genre continues to shape our understanding of political culture and history, it is more important now than ever that women are included to dispel once and for all the myth that their stories are not worth recording.

Rather than adding to the sexist speculation that women politicians experience, political biographers should offer their support for these stories to be told in a consensual and meaningful manner.