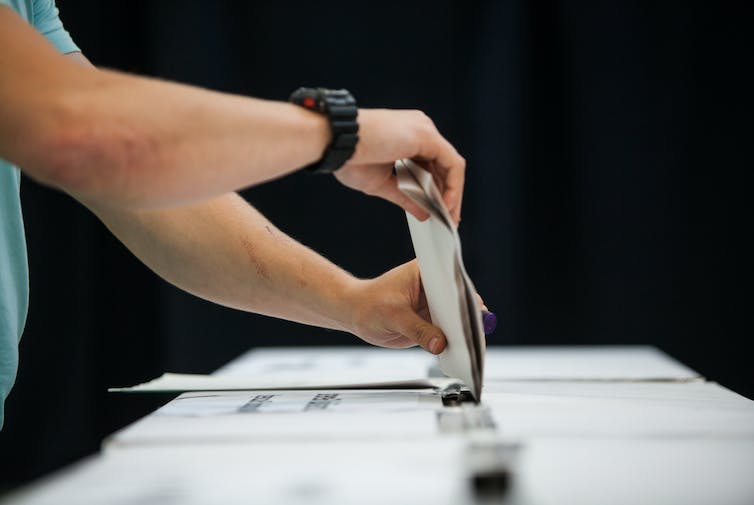 Early voting has begun and election day is looming. Many of us were disillusioned[1] with politics well before the campaign even began, and it’s been going for almost five weeks.

To the ordinary Australian, voting may appear to be ineffective and a waste of time.

The costs of voting - waiting in line or being hassled by volunteer campaigners - can easily seem to outweigh the benefits. It is also highly unlikely an individual vote will directly determine the behaviour of elected representatives.

So, you may be asking yourself, “what’s the point?”.

It is your civic duty

In a representative democracy like Australia, voting gives citizens the power to elect officials, appoint legitimate governments, and have their political concerns heard.

The purpose of voting is not always conclusively to decide the outcome of an election. In fact, the odds of doing so are next to nothing.

But casting your vote fulfils your civic duty. It also spares you an unnecessary A$20 fine[2] for not voting, as compulsory voting is strictly enforced in Australia.

Australia is a representative democracy in which the government is elected by and for the people. Alexandru Nika/Shutterstock

You could be in a marginal seat

Candidates in marginal seats need every vote they can get.

Marginal seats, as opposed to safe seats, are those where the successful candidate beat their closest opponent by winning no more than 6% of the formal vote at the last election.

That means the electorate would need to convince this handful of voters to change hands this time around. That also means marginal seats could see a party win or lose the election.

For example, the 2019 election saw electorates[3] with margins of less than 1% - including Gilmore, Corangamite, Herbert, Ford, Capricornia, and Cowan - swayed by hundreds of votes.

Even if your candidate doesn’t win, your opinion is noted

But even if you don’t live in a marginal seat, your vote could still be influential.

In the upcoming federal election, many traditionally safe Liberal seats are being challenged by teal independents dissatisfied with the Coalition’s policies on key issues like climate change.

Even traditionally ‘safe seats’ like Kooyong are being heavily contested in the lead-up to the federal election. NCA Newswire Pool/AAP

From previous elections, we know many voters are too. In the millennial-dominated Victorian electorate of Kooyong, for example, every vote counts as Liberal Treasurer Josh Frydenberg fights hard to hold his seat against independent Monique Ryan.

Voting also allows ordinary Australians to express their views and opinions - sometimes convincing others to vote similarly. Social network research suggest that voters are influenced[5] by events and people around them. They can change their vote based on political discussions with family or friends.

Importantly, the Senate[6] also provides an avenue to make your voice heard.

The upper house - comprising 76 senators - is a powerful body responsible for checking and reviewing the elected government. The Senate employs a proportional representation voting system[7] which allows greater scope for independents and smaller-party candidates to be elected.

This system also enables a diverse range of issues across multiple states and territories to be included in the political agenda.

Read more: Race for the Senate: could Labor and the Greens gain control?[8]

We are lucky to vote

Many voters may not appreciate that voting is not an automatic right, but one for which Australian suffragists had to fight and campaign.

Some ancient scholars like Socrates didn’t like the idea of non-expert citizens – let alone women or young people – shaping the functioning of government.

Australian ‘suffragettes’ led the charge for female enfranchisement through legislation passed in South Australia in 1895. Shutterstock

Property-owning men were first to obtain the vote[9] in 1843, while women were only granted a say[10] in South Australian state elections from 1895.

In 1924, compulsory voting was introduced for eligible citizens over 21 years of age to improve the low rates of voter turnout across the newly federated Australia. Shamefully, Aboriginal and Torres Strait Islander peoples were only granted the right to vote in 1962.

It’s been a long campaign, but …

Mounting political distrust[11] and pandemic fatigue may lead many Australians to view their vote as irrelevant. Those voting for the first time (there are more than 400,000 in 2022) may find navigating complex policy issues and candidate promises a challenge.

However, it is crucial all voters show up to the ballot box to ensure the issues of most concern to them make it onto the political agenda. This includes housing affordability, education costs, and climate change.

Just as little drops make a mighty ocean, your individual vote does contribute to a stronger democracy.

Read more: What will young Australians do with their vote – are we about to see a 'youthquake'?[12]