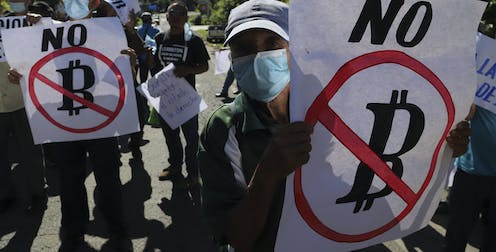 As it hits new highs, there is no shortage of bold predictions about Bitcoin reaching US$100,000[1] or more.

Often these are based on not much more than extrapolations by people with vested interests: the price has gone up a lot so it will keep going up. If it gets above its previous high, it must keep going up.

There is also “charting” or “technical analysis” – looking at graphs and seeing patterns in them. There may be fancy terms such as “resistance levels[2]” and “Tenkan-Sen[3]”. There is talk about “fundamentals[4]”.

Let’s examine this last idea. Does Bitcoin have a fundamental value?

In the case of company shares, the fundamental value is the dividend paid from profits. A standard measure used by investors is the price-to-earnings ratio. In property, the fundamental value reflects the rent the investor earns (or the owner-occupier saves). For a bond, the value depends on the interest it pays.

Gold has a fundamental value also, based on its use for jewellery or dental fillings or in electronics. But this value is not why most people buy gold.

National currencies are different. Their value is in being a trusted and accepted unit of exchange.

In the past coins made with gold and silver had a fundamental value because they could be melted down for their precious metals. That’s no longer the case with fiat currencies, whose value depends solely on people trusting that others accept them at face value.

Most cryptocurrencies, such as Bitcoin, Ethereum and Dogecoin are essentially private fiat currencies[5]. They have no corresponding assets or returns. This makes it hard to determine a fundamental value.

In September analysts with Britain’s Standard Chartered Bank argued[6] Bitcoin could peak at about US$100,000 by the end of 2021. “As a medium of exchange, Bitcoin may become the dominant peer-to-peer payment method for the global unbanked in a future cashless world,” said the head of the bank’s crypto research team, Geoffrey Kendrick (a former Australian Treasury official).

Read more: What is an ETF? And why is it driving Bitcoin back to record high prices?[7]

Theoretically this could be possible. Globally an estimated 1.7 billion people[8] lack access to banking services. But Bitcoin has been spruiked as the future of payments since its invention in 2008. It has made little progress.

There are at least two significant barriers. First is the computational grunt needed to process payments. Technology may overcome this. The second obstacle is harder: the volatility of its price.

Digital currencies that can maintain a stable value are more likely to become payment instruments. These include the existing stablecoins, Meta’s mooted Diem[9] and central bank digital currencies[10], already operational[11] in some Caribbean economies.

So far the only significant company to have accepted payments in Bitcoin is Tesla, which announced this policy in March only to reverse it in May[12].

The only country to adopt Bitcoin as an approved currency is El Salvador (which also uses the US dollar). But it is far from clear what benefits there are. The laws forcing businesses to accept the cryptocurrency have also led to protests.

Hundreds of Salvadorans protest against the use of bitcoin as a form of payment in San Salvador on September 7 2021. Rodrigo Sura/EPA

If Bitcoin has no real value as a widespread means of payment, what about as a store of value, like digital gold? It does have this advantage over most of the “altcoins”. Its supply, like gold, is (arguably) limited.

One tool used by crypto enthusiasts to compare Bitcoin’s scarcity with gold is called the “stock-to-flow” model[14]. This approach claims gold holds its value because the existing stock of gold is 60 times more than the amount of new gold mined each year. The stock of Bitcoin is more than 50 times than the new coins “mined” annually.

But this does not explain why Bitcoin’s price halved earlier this year. Nor does it have any theoretical basis in economics: prices don’t depend just on supply.

Read more: In gold we trust: why bullion is still a safe haven in times of crisis[15]

Some Bitcoin promoters[16] predict higher prices on the assumption funds managers will eventually invest an abritrary proportion, say 5%, of their funds in Bitcoin.

But such predictions implicitly assume Bitcoin, as the largest and best-known cryptocurrency, will continue to maintain its dominant position in the crypto market. This is not guaranteed. And there is no limit to the number of cryptocurrency alternatives.

Remember Bankcard? This credit card company once had 90% of the Australian market in the early 1980s. It was defunct by 2006. What about MySpace? Before 2008 it was a bigger social networking site than Facebook.

In September The Economist[17] argued Bitcoin “is now a distraction” to the future of decentralised finance, with rival blockchain cryptocurrency Ethereum “reaching critical mass”.

Read more: Ethereum: the transformation that could see it overtake bitcoin[18]

There are parallels between the Bitcoin bubble and the dotcom bubble of 2000, driven by overly optimistic assumptions about new technologies – and human greed.

Just as a few stars such as Amazon emerged from the wreckage of the dot.com bubble, so it is possible some applications of the block-chain technology underlying Bitcoin have enduring utility. But I doubt Bitcoin will be one of them.