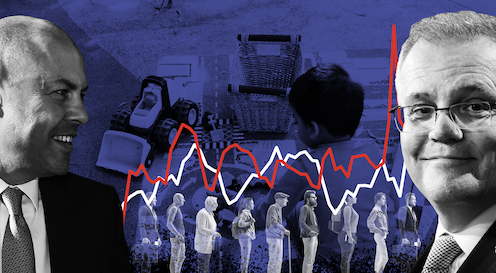 After twenty years of rhetoric from both sides of politics focusing on getting back to surplus, this year’s budget continues pandemic spending in the hope of getting the economy back on track as the pandemic starts to settle.

The projected deficit is $161 billion for 2021-22, but rather than tackling this in the next four years, the government’s focus is instead on payments and long-term serviceable debt.

The government is projecting a bump in real GDP growth in the next financial year, before growth settles again over the near future.

Part of the reason the government can afford to keep spending high is the low cost of international debt. This means that while net debt will continue to increase beyond the next four years the budget estimates cover, net interest payments should remain low.

And another major factor in the budget’s performance – despite the big spending – is the impact of a very high iron ore price, in the midst of a global pandemic.

The chart below shows the difference between policy decisions and other factors, generally beyond its control.

With a major focus on business and infrastructure spending to revive the economy, extensions to tax benefits and announced packages for childcare, there are many spending announcements in this year’s budget and very few cuts or savings.

The difference is so great that we have drawn out some of the major spending announcements and included all significant cuts in our headline figures for this year’s budget.