At the federal level, there hasn’t been any comprehensive reform since the Howard government’s New Tax System of 2000[1], the one that brought in the goods and services tax.

It’s much the same for the states.

With the exception of the reforms that accompanied the introduction of the GST in 2000, state tax systems haven’t changed much since the 1970s, which began with the transfer of payroll tax from the Commonwealth to the states, and ended with the abolition of death duties.

For their part, state governments have spent most of the following four decades narrowing the bases of the few taxes over which they do have control, in order either to curry favour with important groups of voters such as small business people and home owners, or to compete with other states to attract employers.

Australia’s two largest states have become increasingly reliant on a tax uniformly condemned as a “bad tax[2]” – stamp duty on the transfer of land.

Read more: Abolish stamp duty. The ACT shows the rest of us how to tax property[3]

The next two largest states have ridden booms in royalties from mining and gas which have, for the most part, allowed them to avoid the need for even thinking about reforming their taxes.

Only in the Australian Capital Territory has there been a genuine (so far successful) effort to undertake a reform that enjoys almost unanimous support among economists, the replacement of stamp duties on land transfers with a broadly-based land tax[4].

The fact that the ACT government is also in effect the Canberra city council has allowed it to accomplish this by raising rates rather than breaking the taboo of imposing land tax on the “family home”.

Tasmania specialises in bad taxes, and the GST

The Tasmanian government raises less from its own resources (taxes, royalties, user charges and dividends) than any other jurisdiction except the Northern Territory.

That’s largely because, as identified by the Commonwealth Grants Commission[5] in its annual reviews, Tasmania’s revenue-raising capacity is less than that of any other state or territory, although it also partly reflects decisions by successive Tasmanian governments of both political persuasions to raise less than they could.

Perhaps because Tasmania has been able to rely on GST allocations and other grants from the Commonwealth, there have been no serious conversations about its tax system since a tri-partisan parliamentary inquiry was abruptly terminated[6] almost nine years ago.

Read more: Our states are crying poor. They wouldn't if they charged for rezoning[7]

Since then, Tasmania’s political parties have been more anxious to make commitments about what they would not do, than to outline plans for what was needed.

That complacency is likely to be challenged by the abrupt decline in revenue from the goods and services tax as a result of the current recession, as well as by its longer-term decline as a share of GDP for reasons recently identified by the Parliamentary Budget Office[8].

The collapse in GST revenue will hurt Tasmania’s budget more than that of any other state or territory (other than the Northern Territory).

Goods and services tax revenue as a proportion of GDP

There’s a way out

The report I’ve written for The Australia Institute published this morning entitled Reforming Tasmania’s state tax system: Some options[10] notes that Tasmania gets a higher proportion of its total state tax take from “bad taxes” (stamp duty on land transfers, and taxes on insurance premiums) than any state or territory except Victoria.

It gets a smaller proportion of its tax take from what are generally thought to be “good taxes” (payroll tax and land tax) than any state or territory except Queensland.

It proposes three reforms which can be implemented by a Tasmanian government without requiring a lead from the larger states.

None would require financial assistance from the Commonwealth (although that would be helpful, especially with transitional arrangements, if the Commonwealth is as serious about encouraging productivity-enhancing reform as the Treasurer[12] says he is).

1. Land tax instead of stamp duty

The first is to replace existing “conveyancing duties”, as stamp duties on the transfer of land are officially called in Tasmania, with a land tax whose base should include owner-occupied homes and “shacks”, which are currently exempt or otherwise not taxed.

It should be levied on individual land holdings (rather than the aggregate of them) at progressive rates on the per-square-metre value of each holding.

There would need to be a transitional provision, such as a credit for stamp duty paid on recently-acquired property.

And there would need to be a deferral provision for “asset rich, income poor” homeowners such as pensioners. Both are possible.

The average residential land-owner would not have paid more in land tax under this proposal than he or she would have by way of stamp duty on the purchase of the property until he or she had lived in it for more than nine years.

By that time, as the recent Thodey Report[14] to the NSW government points out, any reasonable interpretation of “fairness” demands owners should be paying more than they currently do.

The extra revenue would be used to lower the rate from what is currently the second-highest in Australia to what would likely be the second-lowest, and to exempt new businesses from payroll tax altogether for the first so many years of their existence, where the number of years could be, for example, three or five.

This will produce howls of outrage from small businesses, a larger proportion of which are exempt from payroll tax in Tasmania than in any other state, and from others who (wrongly[15]) believe that small business is the engine room of the economy. 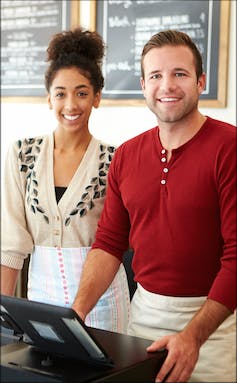 Small businesses are anything but the engine room of the economy.

My report shows that exempting small business from payroll tax has not done anything to enhance job creation, innovation or any of the other blessings commonly claimed.

On the contrary, Bureau of Statistics figures show that over the four years to 2018-19, during which time Tasmania’s economy in many respects out-performed the rest of Australia, small business was responsible for only 13%[16] of Tasmania’s net increase in private sector employment.

Big businesses (who had to pay the second-highest payroll tax in Australia) were responsible for 34%.

Medium-sized businesses, many of whom also had to pay the second-highest payroll tax in Australia, accounted for 52%.

Indeed, over the 12 years to 2018-19, employment at Tasmanian small businesses declined by 11.6% – more than double the national average – despite Tasmania having the most generous payroll tax concessions for small businesses.

Preferencing new businesses would do far more to spur entrepreneurship and to stimulate job creation and innovation than preferencing small ones simply because they’re small.

Read more: Memo to Australia's states: try renovating your tax system before asking for a new one[17]

It would also cost less: which would mean the special treatment for new businesses could be more generous, if desired.

And since new businesses can’t prevent themselves from becoming an old businesses, other than by going out of business, there would be no perverse incentives such as those that currently result in small businesses ceasing to grow at just below the point at which they become ineligible for preferential treatment.

3. Death duties on estates over $1 million

The third, and probably the most controversial, proposal is the reintroduction of death duties: specifically, on estates valued at over A$1 million (which would exclude 91% of the estates granted probate by Tasmania’s Supreme Court over the past three years), at rates ranging from 5% on amounts between $1 million and $5 million, 10% on the next $5 million, and 20% on anything over $10 million (which in Tasmania has been just 10 estates, 0.1% of the total, over the past three years.

However, the report also proposes that people whose estates would be liable to such a tax could obtain a credit against it (a reduction) for donations to Tasmanian-based deductible gift recipients – up to the point where, if they wished, they could completely extinguish their liability.

Such an arrangement would provide a powerful incentive for philanthropy in Tasmania, as it has in the United States[19].

There will of course be predictable cries of outrage against such a proposal, not so much perhaps from those whose estates would be subject to the tax as from their children and others who hope to benefit the inheritances without sharing any of the windfall – a requirement a surprising number of Americans don’t seem to find at all objectionable.

No doubt opponents of such a proposal will also find it convenient to ignore the stipulation that fewer than 10% of estates would be liable for the tax, or the suggestion that estates passing to surviving spouses (though not to other people) would be exempt.

All or any of these proposals could be used to raise more revenue than Tasmania’s present tax system.

Or they could be used to raise less revenue, by a party that wanted to argue that reducing the overall state tax burden would improve Tasmania’s competitiveness.

My report doesn’t take a position in favour of either option[20], instead it advocates for a fairer system.

Read more: Rethink inheritances. These days they no longer help the young, they go to the already middle-aged[21]

The system I propose would be more efficient in the sense of doing less to distort the choices businesses and households make as to how they allocate their capital, where they live, how often they move home and how they do other things.

And it would make Tasmania’s financial position less vulnerable to forces entirely beyond its control or influence.

Which is another way of saying it would represent real reform: something that has been sorely lacking, no less in Tasmania than anywhere else, for 20 years.