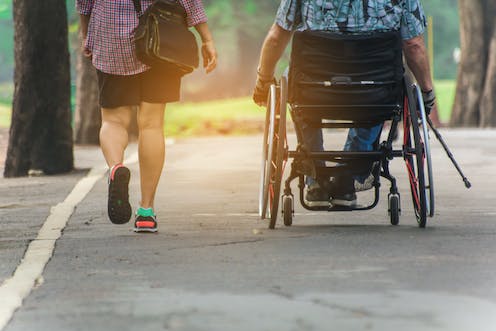 Disability support workers are being significantly underpaid as some core tasks and activities do not get counted as work, our research finds[1].

Like most frontline care workers, the disability support workers in our research are low-paid and work part-time hours only. Employed to provide support to people in their own homes and the community, their working time is highly fragmented, with multiple short periods of paid work spread out over long working days. This means that many also have to work six or seven days a week to earn a living.

Read more: The NDIS costs are on track, but that doesn't mean all participants are getting the support they need[2]

It’s not unusual for the businesses who employ care workers to limit employees’ paid work time. However, under the tight pricing arrangements of the National Disability Insurance Scheme (NDIS), this appears to be leading to excessive unpaid overtime and unfair pay. For low-paid workers this can mean their actual pay rates are being pushed well below minimum award rates.

What workers are spending unpaid time on

Workers travelled directly between different locations to provide support and care and were not paid for this travel time as each incidence of support was treated as a separate work shift.

As a typical example, one woman provided support to four people in four separate locations on one day and she was paid for a total of 3.5 hours’ work for the four separate work shifts. However, she also spent an additional unpaid 55 minutes, 20% of her total work time, travelling directly from one work location to the next.

The workers we studied also regularly spent unpaid time providing direct support, completing mandatory or essential paperwork, and communicating with support recipients, families or supervisors. While the periods of unpaid work were mostly short, say 10 minutes or so, they occurred several times a day.

This type of unpaid overtime amounted to an additional 10% or more on top of paid time over three days, for half the workers we studied.

The financial cost of these two forms of unpaid work combined was significant for these part-time and low-paid employees. Over the three days, for five of the workers, unpaid work made up between 2% and 6% of total work time. We estimate this cost them between around A$9 and A$30 in unpaid wages over the three days.

For the other five employees unpaid work time was between 12% and 21% of total work time. The estimated to cost in unpaid wages for three days was between $25 and $182. These are significant amounts for workers whose earnings for the three days ranged from around $150 to $600.

Why are workers forced to work for free?

Underpayment of social care workers is often invisible and ambiguous.

Under the NDIS personal support and care provided by disability support workers is funded on the basis of a set hourly price. In 2017 research highlighted problems with the NDIS pricing model[3], including: inadequate allowance for workers’ time spent travelling between clients, for tasks other than face-to-face support and inadequate provision for supervision and training. All of these are essential to workers’ ability to provide safe, personalised support.

The recently released review of NDIS pricing undertaken for the National Disability Insurance Agency[4] acknowledged that many service providers are unable to operate profitably under current NDIS pricing arrangements. The report describes the providers that are “working economically” as those operating with more casualised workforces or utilising sole trader care workers.

In contrast, providers that weren’t considered to be working economically were those that offered greater supervision of workers, had more experienced workforces or had enterprise agreements that paid wages above the award minimum.

A strong theme running through the report is that these service providers should be able to reduce their labour costs. Yet, our research suggests low-paid disability support workers may already be subsidising the system and bearing the consequences of inadequate prices for disability support, through wages underpayments and unfair pay practices.

Disability care is a female-dominated industry and the undervaluing of women’s work underpins inferior minimum employment conditions[6]in the industry. This includes an absence of minimum shift times for part-time employees and lack of an explicit provision for payment for time travelling between work assignments.

The NDIS is expected to generate about one in five of all new jobs in Australia in the next few years[7] with many of these jobs likely to be frontline disability support jobs. The nature of these jobs is not only critical to the working lives of many employees, now and in the future, but also to the quality of support provided to people with disability and others requiring care.