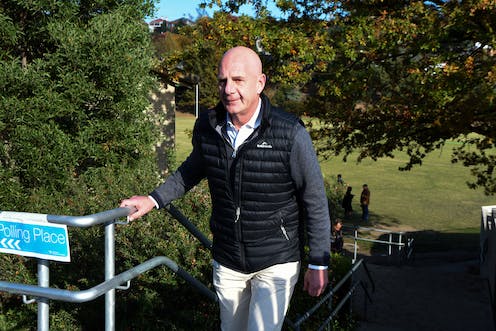 The Tasmanian Liberal government has been returned for a record third term, vindicating premier Peter Gutwein’s decision to go to an election a year early.

However, rather than the big swings to the incumbent governments seen in recent elections in Queensland[1] and Western Australia[2] due to their management of the pandemic, the result in Tasmania maintained the status quo.

While benefiting from Gutwein’s high personal popularity due to his management of the pandemic, the Liberal vote fell slightly from 50.3% at the 2018 election to 48.8% at the close of counting late on Saturday night. However, Labor’s vote fell[3] 4.5% to just 28%.

The Liberals are poised to win 13 seats[5] in the 25-seat House of Assembly, Labor nine, the Greens two and one independent.

Under Tasmania’s Hare Clark proportional electoral system, five members are returned from five seats. These are Bass in the state’s north, Braddon in the north-west, Clark and Franklin in the greater Hobart area and southern region, and Lyons, which sprawls across the state’s centre and east coast.

To win a seat, each candidate needs to win 16.6% of the formal vote but, based on the percentage of vote for each party group, it is clear the Liberals will win three seats in each of Bass, Braddon and Lyons, two seats in Franklin and most likely two seats in Clark.

Labor’s nine seats include two in Bass, Braddon, Franklin and Lyons but only one in the party’s former stronghold of Clark. The main reason for this is the loss of votes to two high-profile independents – Glenorchy City Council mayor Kristie Johnston and the former Liberal speaker Sue Hickey – one of whom is predicted to win a seat on preferences.

The Greens vote[6] is up 2% to 12.3% statewide, securing the two seats they held in the previous parliament in Clark and Franklin, but not enough to win further seats.

Labor leader Rebecca White conceded defeat on Saturday night, congratulating Gutwein on winning the election and for his high personal vote after securing almost half the available votes in his electorate of Bass[7]. This is among the highest individual votes in the modern era.

Read more: As Tasmanians head to the polls, Liberal Premier Peter Gutwein hopes to cash in on COVID management[8]

Gutwein claimed victory but stopped short of declaring he had secured a majority, saying only[9] it appeared “increasingly likely”.

The election outcome means a return to the one-seat majority his government held just prior to the election. He also made history by securing the Liberals a record third term in office in Tasmania.

While the balance of seats remains much the same, there will be a turnover of members[10] with some new faces replacing former MPs.

In the government line-up, Hickey, who was ousted from the Liberal Party a few days before the election was called, looks likely to be replaced by former Labor MP turned independent Madeleine Ogilvie, who switched to the Liberals just days after Gutwein announced the election.

In Braddon[11], first-term MP Felix Ellis lifted his vote by 6.1% while scandal-prone former MP Adam Brooks has edged ahead of housing minister Roger Jaensch and may replace him in the Liberal team.

On the opposition benches, Kingborough Council mayor Dean Winter[12], who was the subject of a fierce factional battle to prevent him standing for Labor, will replace Labor frontbencher Alison Standen in Franklin.

Tasmania also saw elections in two of the Legislative Council seats of Derwent in the state’s south and Windemere in the north. Labor MLC Craig Farrell defeated his Liberal rival, Derwent Valley mayor Ben Shaw. In Windemere, where the sitting independent retired, Liberal candidate and television presenter Nick Duigan is leading Labor’s Geoff Lyons and independent Will Smith. That seat will be decided by preferences.

It will be 10 days before the final distribution of preferences can commence in the House of Assembly election due to the need to wait until all postal votes are counted. But only in Clark is there potential for this process to affect the election result.