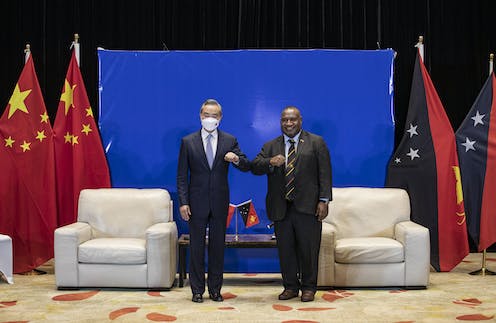 The signing of a security agreement[1] between Solomon Islands and China in April 2022 brought geopolitical competition and militarisation in the Pacific to the fore of public discussion.

Australian policymakers and the public are concerned about the potential for a Chinese military base in the Pacific region. They harbour wider concerns that China’s influence is becoming sharper and more destructive.

At a time of intensifying geostrategic competition, Australia may feel pressure to take a short-term and transactional approach towards the Pacific. Such crisis thinking would be unnecessary and counterproductive.

Australia should frame its relationship with the Pacific in terms of long-term, generational partnership. It should be responsive to the Pacific’s priorities for development with a clear eye on a shared, long-term future.

The Pacific will always be of great strategic significance for Australia. Peace and stability in Pacific island countries goes to the heart of Australia’s security, prosperity and national interest.

This means Australia’s interest in the region, and the attention it pays to it, should remain clear, consistent and coherent[2], irrespective of whether there are crises or not[3]. Genuine, consistent Australian engagement should address each Pacific island country’s unique needs through both bilateral and regional Pacific-led initiatives.

Read more: As Wong makes her mark in the Pacific, the Albanese government should look to history on mending ties with China[4]

There is a danger that a focus on China could overtake other priorities. This would undermine trust and lead to Australia’s diplomatic intentions not always being well-received. If Australia privileges its own institutional requirements and solutions above local agency and solutions, it can feed negative perceptions about Australia’s intent.

Foreign Minister Penny Wong has spent much time in the Pacific since Labor won office. AAP/AP/Department of Foreign Affairs

When Pacific leaders look at regional security they have an expanded view, which includes climate change, human security, gender equality, environmental and resource security, transnational crime and cybersecurity. This reflects insecurity in the Pacific at multiple levels:

These shared challenges and mutual threats require the long-term attention of Australia and Pacific island countries. We need to move beyond paying lip service to each others’ security concerns and develop a common security framework that responds to the full set of peace and security challenges in the Pacific. This requires deepening relationships and making sure shared concerns are not lost along the way.

The good news is there are strong foundations to work on in Australia-Pacific co-operation. Australia has security co-operation arrangements with most Pacific Island states. These include police-to-police co-operation, defence capacity-building and joint military exercises.

Read more: Amplifying narratives about the 'China threat' in the Pacific may help China achieve its broader aims[5]

There are development programs designed to address drivers of fragility such as inequality and inclusive economic growth. There has been co-operation on climate science, sustainable fisheries and preserving maritime boundaries in the face of sea-level rise. Australia has goodwill in the region to draw on.

There is a risk that Australia’s concerns about geopolitical change lead it to overstate differences with Pacific island countries. There will always be areas where views and interests align, and others where they do not.

Australia needs to envisage Pacific island countries as a network of interaction, trade, exchange, communication and influence reaching across much of the Pacific Ocean. Strong relationships are not made up only of defence and security ties, and do not come into play only in situations of threat. They are the product of long-term, consistent and multifaceted engagement, genuine partnership with and respect for countries that are equally sovereign, and exchange that takes seriously all parties’ priorities, concerns and values.

The opportunity exists for a rhetorical reset framing Australia as a generational partner for Pacific societies. Faced with a challenge to its profile and influence, Australia should pursue a long-term approach. The focus should be on economic integration, reciprocity and sustained commitment to generational progress.

Australians should accept that Pacific island countries will engage with other countries, and work towards bridging the gaps in our defence, development and diplomatic relationships with the region.