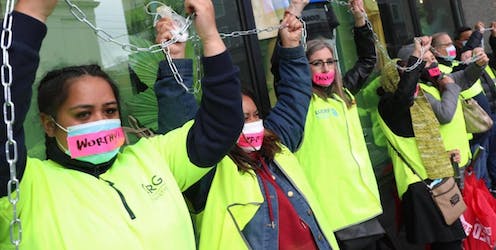 Amid the catwalk shows and millinery workshops, a key theme of this year’s Melbourne Fashion Week[1] was sustainablity, “offering designers with strong ethical foundations an opportunity to join our runways, or opening up dialogue on sustainability into our talks program”.

Events during the week included industry representatives discussing “shifting the status quo[2]” and moving “beyond greenwashing[3]”. On the panel at the latter event was Eloise Bishop, head of sustainability at Country Road Group, one of Australia’s largest specialty fashion retailers.

Meanwhile workers from the company were on strike, chaining themselves together and staging other protests outside Country Road stores in pursuit of better wages and working conditions.

Among the complaints of these workers, mostly women from the company’s distribution warehouse in Melbourne’s west, was being paid an average of A$23 an hour[4], compared to about A$30 for workers doing similar work at the Pacific Brands warehouse across the road.

On Monday the workers returned to work after reaching an agreement with the company that includes improved job security, union recognition and a 13.3% pay rise over four years. That’s about an extra $3 an hour.

While this has brought the strike to a celebratory end, questions remain. How could a company so highly regarded for its commitment to sustainability have provoked staff to strike for almost a fortnight?

Country Road Group is a subsidiary of South Africa’s Woolworths Holdings Ltd[5] (which also owns David Jones). The company’s clothing brands include Country Road, Witchery, Trenery, Politix and Mimco. Despite the pandemic, in the past fiscal year Country Road Group’s sales grew by 13.5% to A$1.05 billion[6].

The company is considered by many an industry leader on ethics and sustainability. The 2021 Ethical Fashion Guide[7] compiled by Baptist World Aid, for example, awarded it an overall “A” grade. It did well on four of five rating criteria, scoring an “A+” on its policies and governance, “A+” for trading and risk, “A” for supplier relationships and human rights monitoring, and another “A” for environmental sustainability.

On worker empowerment, however, it scored just a “C”.

These results suggest the company has a blind spot in addressing concerns about labour conditions in its supply chain.

In part because of the disparities between how the fashion industry markets its products and the way workers are treated, the global fashion industry is a notorious example of exploitation engendered by opaque supply chains.

Modern Slavery Statements Register[11] Attempts to bring greater transparency[12] and accountability to these supply chains include Australia’s Modern Slavery Act. This requires large companies to submit an annual statement to a public registry outlining efforts to identify and eliminate the risk of exploitative labour practices. Country Road Group’s 2020 Modern Slavery statement[13] states the company is “committed to upholding the highest social, ethical and environmental standards in its supply chains”. But commitment to ethics is arguably easier when the “problem” of labour rights is far away and things like modern slavery statements (which rely on third party auditing) can help to conceal unethical practices. What happens when the issue is on our doorstep? Read more: At last, Australia has a Modern Slavery Act. Here's what you'll need to know[14] Fair pay for all We often think about the concept of a “living wage[15]” in relation to garment workers overseas. But these warehouse workers told their union representatives they could not afford to live on the wages paid by Country Road Group, much less clothe themselves or their children in the very garments they pick and pack at the warehouse. According to industry body the Australian Fashion Council[16], 77% of the 489,000 workers employed in Australia’s fashion and textile industry’s workforce are female. This makes fair pay and conditions in the industry an important driver of women’s economic advancement. Industrial action is about more than money; it is about respect and recognition. Responsibility for change in the fashion industry is frequently feminised[17]. Women are not only the primary workforce; they are at the front lines of sustainable action, consumer activism and labour rights movements. It was a proposed strike by members of the International Ladies Garment Workers Union in New York in 1909 that led to the establishment of International Women’s Day[18]. The move towards sustainability and ethical production in the fashion industry is necessary. But if action does not extend to the realities of all workers across the supply chain, the rhetoric is empty. Note: co-author Lauren Kate Kelly is a researcher with the United Workers’ Union, which covers Country Road warehouse employees.