Australian farmers have proven their resilience, rebounding from drought and withstanding a global pandemic to produce record-breaking output[1] in 2020-21.

But while the pain of drought is fading from view for some, the challenge of a changing climate continues to loom large.

Farmers have endured a poor run of conditions over the last 20 years, including a reduction in average rainfall (particularly in southern Australia during the winter cropping season) and general increases in temperature.

While these trends relate to climate change[2], uncertainty remains over how they will develop, particularly over how much rain or drought farmers will face.

Research published today[3] by the Australian Bureau of Agricultural and Resource Economics and Sciences (ABARES) examines the effects of past and potential future changes in climate, and sets out how productivity gains to date have been helping farmers adapt to the drier and hotter conditions.

Conditions have been tough

The research examines the effect on farms of climate conditions over the past 20 years, compared to the preceding 50 years.

Holding other factors constant (including commodity prices and technology) ABARES estimates the post-2000 shift in conditions reduced farm profits by an average of 23%, or around A$29,000 per farm per year.

As with past research[5], these effects have been strongest among cropping farmers in south-eastern and southern-western Australia, with impacts of over 50% observed in some of the most severely affected areas.

Effect of 2001 to 2020 climate conditions on average farm profit 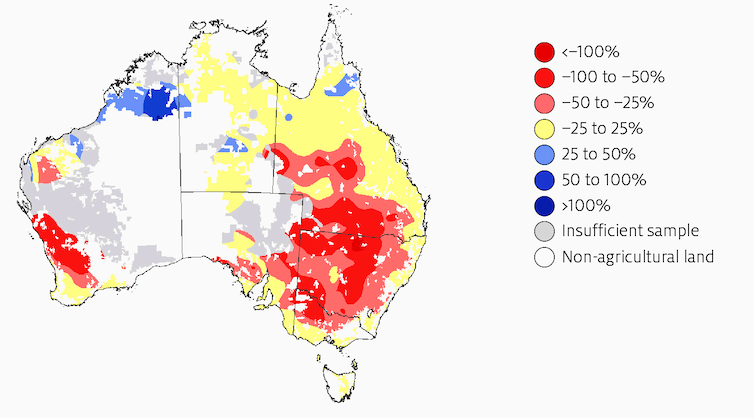 Farmers have been adapting

While these changes in conditions have been dramatic, farmers’ adaptation has been equally impressive.

After controlling for climate, farm productivity (the output from a given amount of land and other inputs) has climbed around 28% since 1989, with a much larger 68% gain in the cropping sector.

These gains have offset the adverse climate conditions and along with increases in commodity prices have allowed farmers to maintain and even increase average production and profit levels over the last decade.

While productivity growth in agriculture is nothing new, the recent gains have been especially focused on adapting to drier and hotter conditions.

Within the cropping sector, for example, a range of new technologies and practices have emerged to better utilise soil moisture to cope with lower rainfall.

As a result, Australian farmers have produced remarkable harvests making use of limited rain, particularly in Western Australia[6].

While climate models generally project a hotter and drier future, a wide range of outcomes are possible, particularly for rainfall.

Climate projections suggest that nationally farmers could experience reductions in average winter season rainfall of 3% to 30% by 2050 (compared to 1950-2000).

The study simulates the effect of future climate change scenarios with current farm technology and no further productivity gains.

As such, these scenarios are not a prediction, but an indication of which regions and sectors might be under the greatest pressure to adapt.

Livestock farms will also face more pressure under high emissions scenarios as they are especially impacted by higher temperatures. 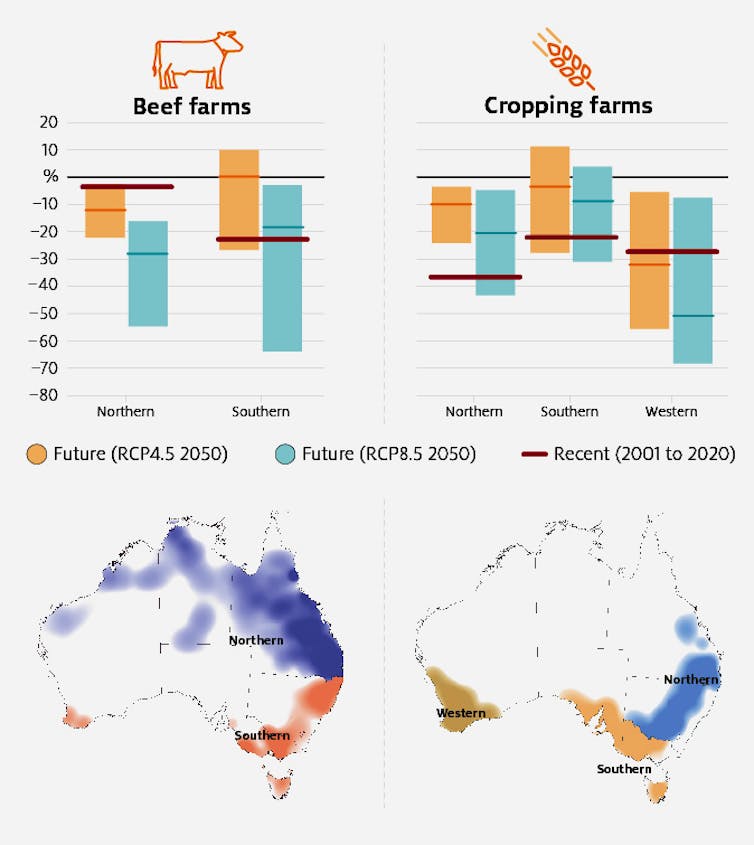 There is more work ahead

Recent experience shows that productivity growth can help offset the impact of a changing climate.

However, there remains uncertainty over how far technology can push farm efficiency beyond current levels.

Further, even if technology can offset climate impacts, other exporting nations could still become more competitive relative to Australia, if they are less affected by climate change or can adapt faster.

Here, investment in research and development remains crucial, including efforts to improve the productivity and reduce the carbon footprint of existing crop and livestock systems, along with research into more transformational responses to help diversify farm incomes. 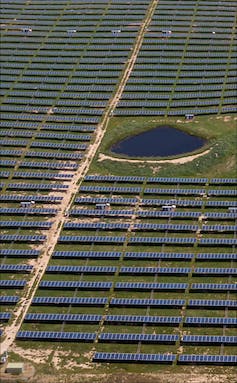 Farmland can be repurposed. Mick Tsikas

This could include for example, carbon and biodiversity farming, plantation forestry and the use of land to produce renewable energy.

Carbon and biodiversity farming schemes are the subject of ongoing research and policy trials[9], and already we have seen farmers generate significant revenue[10] from carbon farming.

Uncertainty over the future climate, especially rainfall, remains a key constraint on adaptation. Efforts to refine and better communicate climate information through initiatives such as Climate Services for Agriculture[11] could help farmers and governments make more informed decisions.

While the future is still highly uncertain, the challenge of adapting to climate change is here and now.

Significant resources have been committed in this area, including the Australian government’s Future Drought Fund[12].

We need to make the most of these investments to prepare for whatever the future holds.