Among the many explanations put forward for soaring home prices[1], one we hear repeatedly is zoning[2] — the regulations that govern the purposes for which land can be used, including how densely people can be housed in different locations.

The real estate industry says if only we relaxed the zoning rules[3] and allowed more houses and apartments to be built on each block, housing would be cheaper, maybe A$355,000 per unit cheaper if the Reserve Bank[4] is right.

It’s a story as grounded in simplicity as it is (on the part of developers) in self-interest.

So effective is the mantra it has become part of the official story in Britain[5] and the United States[6], and to some extent[7] here.

Studies which point the finger at the planning system almost universally fail to quantify the extent of housing permitted by planning regulations and how it has changed over time.

Rarely have changes in zoning been examined

Analysis by Australia’s Reserve Bank[8] for example, treats zoning rules as though they exist in stasis; an ever-present yet spatially-varied regulation measured by whatever price remains once structure and land values are subtracted.

Our new research[9] fills the gap by measuring changes in zoning at the level of individual properties in greater Brisbane. 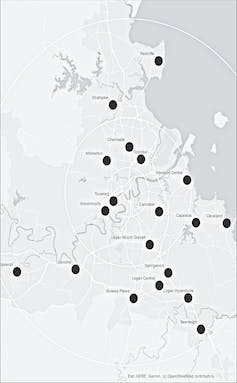 We examined 20 years of changes to zoning, housing supply and prices across more than 25,000 sites in 19 major centres subject to repeated[10] zoning changes designed to encourage urban infill.

The centres had within them a wide variety of land use types (detached dwellings, medium-density dwellings, commercial and retail use, etc.) and housing densities. We reviewed and mapped historic and current rules to determine how the zoned capacity changed on each site.

We combined this with data on the changes in land use on each site, changes to the actual supply of dwellings, and property prices.

If the semi-official story was true, we would have expected increases in zoned capacity to lead to falling prices.

Our results show no such thing. Locations with increased zoned capacity for housing saw increased (not reduced) property prices. Across the selected sites, houses increased in value by a factor of three and apartments by 2.3 over the two decades studied, as they did elsewhere in Australia.

During this time, the zoned capacity for housing at these locations doubled. But there was no rush to take up the increase in capacity. 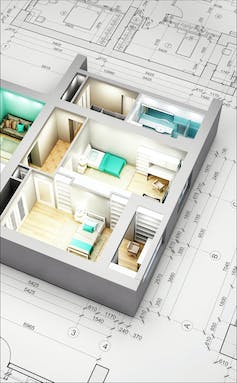 Developers hold off until prices are right.

The vast majority of sites (94%) were not developed within five years of the zoning changes.

Even after 20 years, 71% of the extra capacity remained unexploited.

We found evidence for an alternative story: that planning regulations permit development, but it is the market price that determines if and where development occurs.

Under this story, developers select their sites, build, and sell in strong markets and wait or avoid selling when markets are weak.

This partly explains why locations with highest initial property prices were the most likely[11] to be developed.

Like all good stories, the semi-official one contains an element of truth. If the planning system failed to allow for enough growth, it would almost certainly drive up prices.

Rarely is supply a problem

To avoid this, planning authorities go to great lengths[12] to ensure there is enough zoned capacity to cater for projected growth.

This is one reason why we don’t have a housing supply problem[13]. Deregulating the planning system won’t change that, but nor will it ease price pressure.

What it will do is reduce the environmental and other benefits zoning provides, while continuing to allow developers to sell properties at times of their choosing[14].

What is driving up house prices now has little to do with zoning, and it is happening worldwide.

Read more: When houses earn more than jobs: how we lost control of Australian house prices and how to get it back[15]

Throughout the globe we have seen increases in easy access to cheap credit and tax regimes that encourage speculative property investment.

Unlike planning regulations, which vary hugely by location, these macroeconomic factors are common. They help explain why the housing affordability crisis transcends national boundaries.