Twice the goods and services tax had been rejected, the first time by Labor, which came close to introducing something similar in 1985[1] and then by the Australian electorate, which rejected the Coalition’s Fightback tax reform package in 1993[2].

It had been recommended to the government by the Asprey Tax Review[3], which reported to Prime Minister Gough Whitlam in 1975 after being set up by Prime Minister William McMahon in 1972.

The cabinet records for 1998 and 1999 released this morning by the National Archives don’t give us much of an idea about what made Prime Minister John Howard try one more time, within a year or so of being elected on a promise that there is “no way a GST will ever be part of our policy[4]”.

“Never ever?[5]” the interviewer asked Howard. “Never ever. It’s dead. It was killed by voters at the last election,” Howard replied.

Some of the momentum came from a series of High Court decisions[6] in 1997 that made it illegal for Australia’s states to continue taxing petrol, alcohol and tobacco.

The Commonwealth had to step in. And according to cabinet historian Paul Strangio, who has reviewed the papers released this morning, part of it came from a feeling the government had lost its way, amid “rumblings about the security of the prime minister’s leadership”.

But the papers[7] do give us a good idea of how the momentum became unstoppable.

Once Howard set up a taskforce in August 1997 and asked it to come up with a plan to cut income tax, introduce a broad-based indirect tax and reconfigure Commonwealth-state financial relations, he had a sense of direction.

He called an election a fortnight after announcing the GST on August 13 1998, which he only narrowly won.

His ministers found themselves sidelined, being reduced to offering suggestions for presentation, given that the direction of the policy was already public. 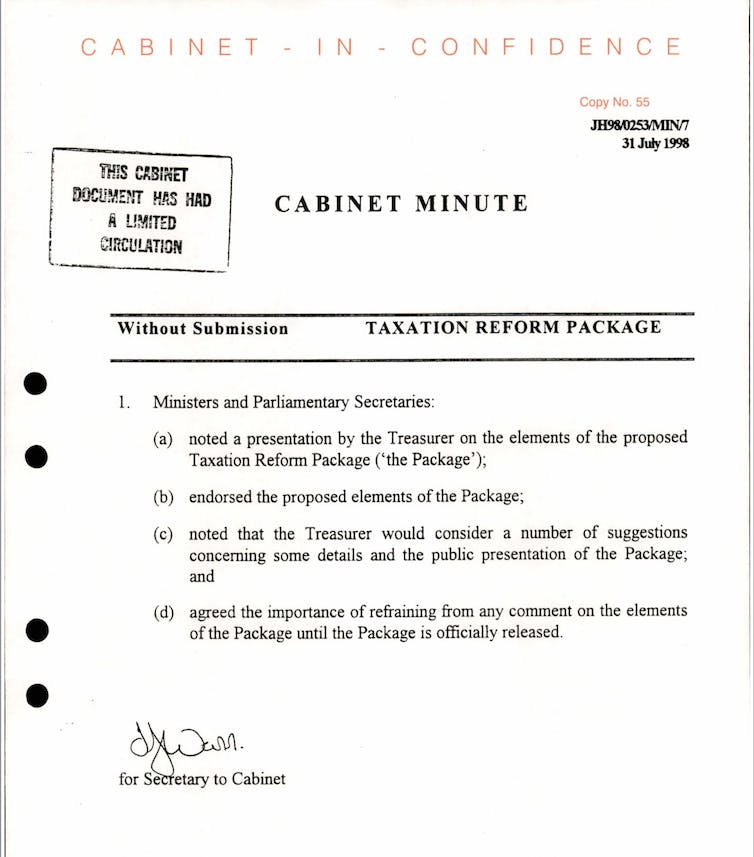 “Were there doubters in the cabinet? Of course there were,” Howard’s treasurer, Peter Costello, said today’s release. “But by that stage we had said several times we were doing it, there was no point in saying let’s not do it.”

So I’d walk out of cabinet meetings with lists of suggestions, one goes on for several pages, instructing the treasurer to do better in explaining the role of the tax on this sector, do better on explaining the exemption for diesel fuel, it went on and on.

Costello made history by presenting to the cabinet on PowerPoint, using slides that have long-since been lost. He also displayed computer modelling of the effect of every income group and family type of every proposed variation in rates and thresholds. He said:

You’ll find one minute in there that says the treasurer presented a proposal for tax reform, which was adopted. That’s the minute of a meeting that went on for seven hours saying how every group would be in front or behind. I became the government’s PowerPoint guy.

As we were coming out of that cabinet meeting after seven hours I asked one of my senior colleagues, how do you think this is going to go? He said he didn’t know, but he liked the colours.

The cabinet made a momentous and expensive decision; that on average no income group of family type would be made worse off.

It lifted pensions and other payments by 4% in order to “overcompensate”, and found itself overcompensating even more when fresh food was excluded from GST in order seal a deal with the Australian Democrats. 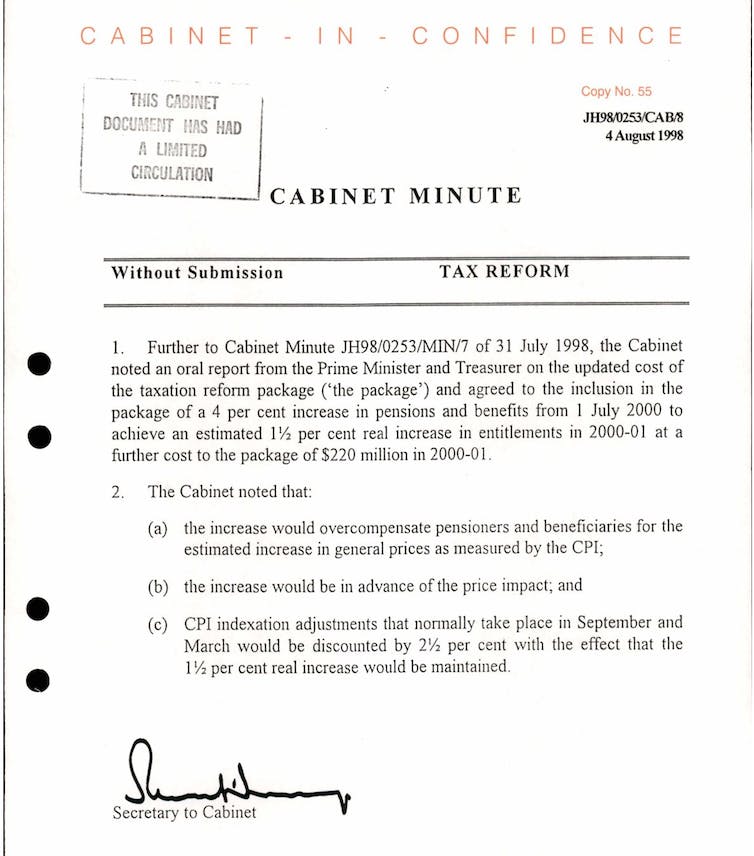 Costello had been determined to get the tax in by July 1 2000, just before the Sydney 2000 Olympics. This would allow him to tax hoards of overseas visitors, most of them from countries that already had goods and services taxes.

He admits to nervousness in the lead-up to the date when almost every price in Australia had to change, some coming down as higher wholesale taxes were revoked, and some going up by as much as 10% which was to be the new standard rate. By design, the GST was to be hidden from consumers, incorporated in new prices.

I remember having having a meeting in the cabinet room. We called in (Chief Executives) Peter Bartels from Coles Myer and Roger Corbett from Woolworths. One of them I think it was Roger, said to me: ‘you are telling us to change one billion prices on June 30. One price at a minute to midnight, another on the stroke of midnight. How we do that?’

I had never thought of it in those terms, I began to wonder whether it was a good idea.

The GST created millions of tax collection points, making it far more complex than other attempts at reforming taxes such as the Rudd governments mining tax and the Gillard government’s carbon price.

Each had to be issued with an Australian Business Number. 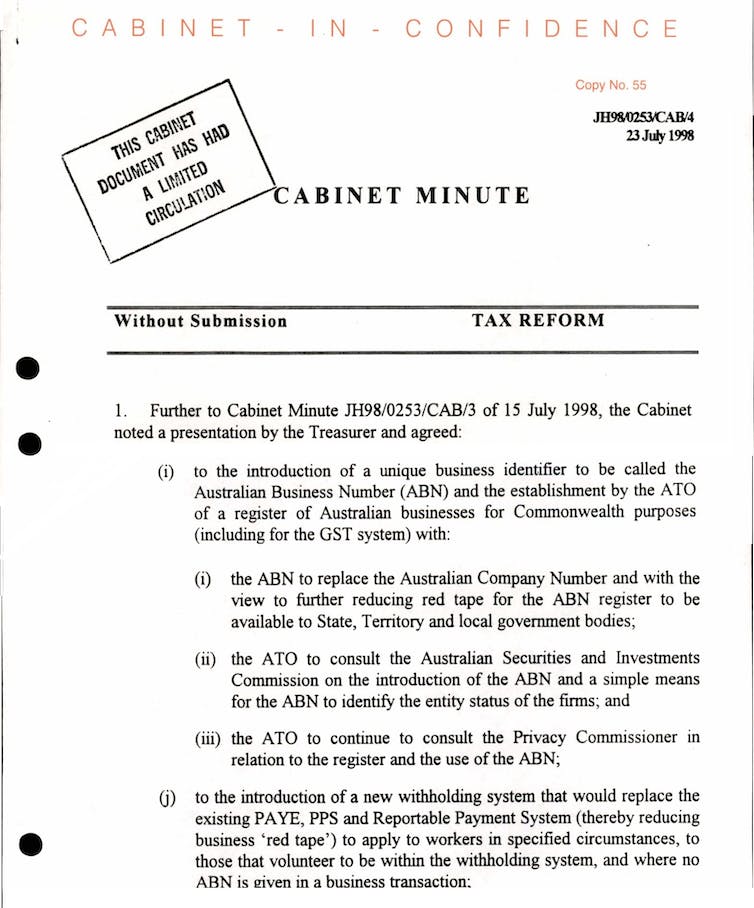 We thought there were 800,000 businesses in Australia. By the time we finished, we had issued two million Australian Business Numbers, including many businesses that had never been known before.

It didn’t go smoothly at first. Businesses, like the cabinet, were new to computerisation. But by the time Labor’s Kim Beazley was defeated in the 2001 election on a platform that included a “rollback” of the GST, it had come to be accepted as part of the Australian way of paying our way.

Costello’s biggest surprise is that it didn’t go up. It remains at 10%, in part because of a deal that lacks legal force[11] requiring every state to agree before it does.

He says he thought the deal would hold for a while because there would usually be a state going into an election that would veto an increase. He never thought it would hold for 20 years.

Read more: FactCheck: is the GST as efficient but less equitable than income tax?[12]

Today’s release of archival documents contains lessons for Howard and Costello’s successors. One is that over time, almost any change will come to be accepted as normal. In the language of tax veterans, and “old tax is a good tax”.

It’s what Costello’s predecessor Paul Keating discovered when he introduced the capital gains tax and the fringe benefits tax. After a while, they become normal.

The other lesson is that it pays to buy off likely losers. It also pays to bring in a change that at first loses more than it brings in. Overcompensation is expensive, but if the change is a good one, it can be worthwhile.

It sometimes isn’t enough, though, as Gillard discovered when she brought in the carbon price and overcompensated almost everybody.

Another secret ingredient might have been the broad support from groups that were normally opposed.

Business backed it as a way of getting taxes off incomes and the welfare lobby backed it as a guaranteed stream of money the government could use to provide social services.

It’s an agreement about means, if not ends, that doesn’t come along often.