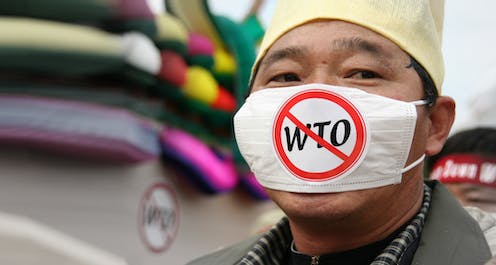 In line with his usual practice, Prime Minister Scott Morrison has backed Donald Trump over the World Trade Organisation, criticising of China’s status in it as a “developing country”.

Critics of the intervention have pointed out that being a “developing country” doesn’t provide China with many benefit[1], and that Australia would be better off not taking sides.

But the debate, to use the cliché, is like arguing about the deck chairs on the Titanic.

In the absence of a surprising reversal from Trump, the World Trade Organisation will cease to exist as it has been in a matter of weeks[2].

More likely than not, it will never be revived.

The demise has been a long time coming.

The WTO was established to replace the General Agreement on Tariffs and Trade[3] at the end of the long Uruguay round[4] of trade talks in 1995.

Its establishment coincided with the peak of market liberal triumphalism, exemplified by such books as Fukuyama’s The End of History[5] and Thomas Friedman’s The Lexus and the Olive Tree[6].

It embraced the hubris of the times.

Its mission, according to one of its director-generals Renato Ruggiero, was “writing the constitution of a single global economy[7]”.

In that context it felt free to override national governments on any issue that might affect international trade, most notably environmental policies.

Most famously, the WTO overrode US laws that required tuna and shrimp sold in the US (whether by US firms or importers) to follow practices that protected dolphins[8] and turtles[9] in decisions that were eventually reversed.

Unsurprisingly, it became a symbol of the way democratic governments were becoming powerless to resist the forces of the global economy. Popular resistance, including demonstrations and riots[11], boiled over at the 1999 WTO conference in Seattle.

Although tight security prevented a recurrence of the “Battle of Seattle” in later years, the WTO never recovered its aura of invincibility.

…too close to the sun

The Doha round of negotiations, launched in 2001, broke down over attempts by developed countries to push the so-called “Singapore issues[12]” that would have extended the free trade agenda to government procurement, investment, and competition. They would have mandated the adoption of free-market policies throughout the world, and so met vigorous resistance.

After limping along for a decade or more, the negotiations petered out in a limited agreement reached at Bali in 2013.

Meanwhile, the United States, which had been the primary promoter of the worldwide rules-based WTO model, shifted its focus to one-on-one agreements unencumbered by rules, such as the Australia-US FTA[13], where it could take advantage of its superior bargaining power.

Read more: A decade on, is the Australia-US FTA fit for the 21st century?[14]

In all these agreements, including the Australia-US agreement, the US gave hardly any ground on issues such as agricultural protection, while extracting concessions on intellectual property and special treatment for US investors.

The culmination of the process was going to be the Trans-Pacific Partnership, a 12-nation agreement which had the geopolitical goal of keeping China out[15] of important trading agreements.

This deal, lauded by Hillary Clinton as the “gold standard” of international agreements, was dumped by Trump. It was resurrected by the remaining parties, but is largely pointless without the participation of the US[16].

As in other areas of policy, Trump’s tariff wars are often characterised as a radical break with the past, but they can also be seen as a continuation of long-standing trends.

Trump’s attempts to exploit the greater size of the US economy to extract concessions isn’t new. The problem is that his chosen targets, China and the European Union, have been big enough to resist, using the WTO.

His response has been to cripple the WTO by refusing to appoint new judges to its appellate panel[17].

By December only one judge will be left and the WTO will be unable to take on new cases[18].

To prepare for this likely outcome, the EU has set up structures[19] that would allow it to retaliate against the US on a far larger scale than WTO rules would allow.

Read more: Are Trump's tariffs legal under the WTO? It seems not, and they are overturning 70 years of global leadership[20]

China is attempting to do the same thing using Regional Comprehensive Economic Partnership[21]), in which Australia – but not the US – would be a member. And it is going beyond trade restrictions, warning Chinese tourists and businesses against travelling to the US[22].

The recent thaw in the trade war might halt the escalation for a while, but it’s unlikely to reverse it.

…for which we’ve few plans

If Trump is re-elected in 2020, the World Trade Organisation will be, for all practical purposes, finished.

The rules will revert to those of the earlier General Agreement on Tariffs and Trade, which give large countries like the US much more scope to do what they want.

Even if Trump is defeated, it is unlikely Humpty Dumpty can be reassembled. Likely Democratic alternatives such as Elizabeth Warren are not free-traders.

And, having rearmed in response to the US, other countries aren’t likely to put down their weapons.

It raises interesting questions for advocates of a “hard Brexit” who are relying on Britain relying on WTO rules.

UK trade minister Liz Truss says she is backing Trump in his campaign to “reform[24]” the WTO, but the reform he is talking about will make its universally-applied rules weaker. By the time the UK emerges alone into the world market, it is likely to find there is little to protect it from the trading practices of the US, China and EU, whether they are fair or not.

The same points apply in spades to Australia. In backing Trump against China, our government is a (presumably unwitting) partner in the dismantling of the rules-based order we have previously defended.

It would be nice to imagine that we have plans for what comes next, but there is little to suggest we do.