When Australian companies report results they typically include an outlook statement from the business’ leaders, giving investors some guidance about their expectations for the future. They issue these forward-looking statements with some caution as investors might rely on them, and the law requires that they be based on “reasonable grounds”.

The Conversation’s Face Value[1] uses sentiment analysis to try and determine how Australian business leaders are feeling about the future. This gives us an idea of what might be in store for our economy.

Business leaders in health and consumer discretionary sectors are feeling less positive about the year ahead because consumers are feeling the pain in the hip pocket, according to our analysis of the outlook of leaders of Australia’s ASX 200 companies. The threat of changes in regulation also features in business leaders’ fears.

Roughly four out of five[2] Australian workers earn their living from private businesses. So we should care about how Australian business leaders are feeling about the future of their businesses, because it’s our future.

The consumer discretionary sector encompasses industries that tend to be the most sensitive to economic cycles. They include businesses that produce goods like cars, clothes and leisure equipment but also services like hotels, restaurants and media.

Business sentiment in the consumer discretionary sector fell in March 2018 relative to the 2017 September business reporting season - from 0.19 to 0.13; and also compared with March 2017 but by a smaller magnitude.

Companies with lower than average sentiment for the year ahead included retailer Myer (0.05) – no surprise given the ongoing weak performance[3] and takeover speculation; and Nine Entertainment (-0.03), facing[4] ongoing cost pressures from digital media competition. Also less positive were Skycity Entertainment Group (0.01) and Webjet (-0.02). 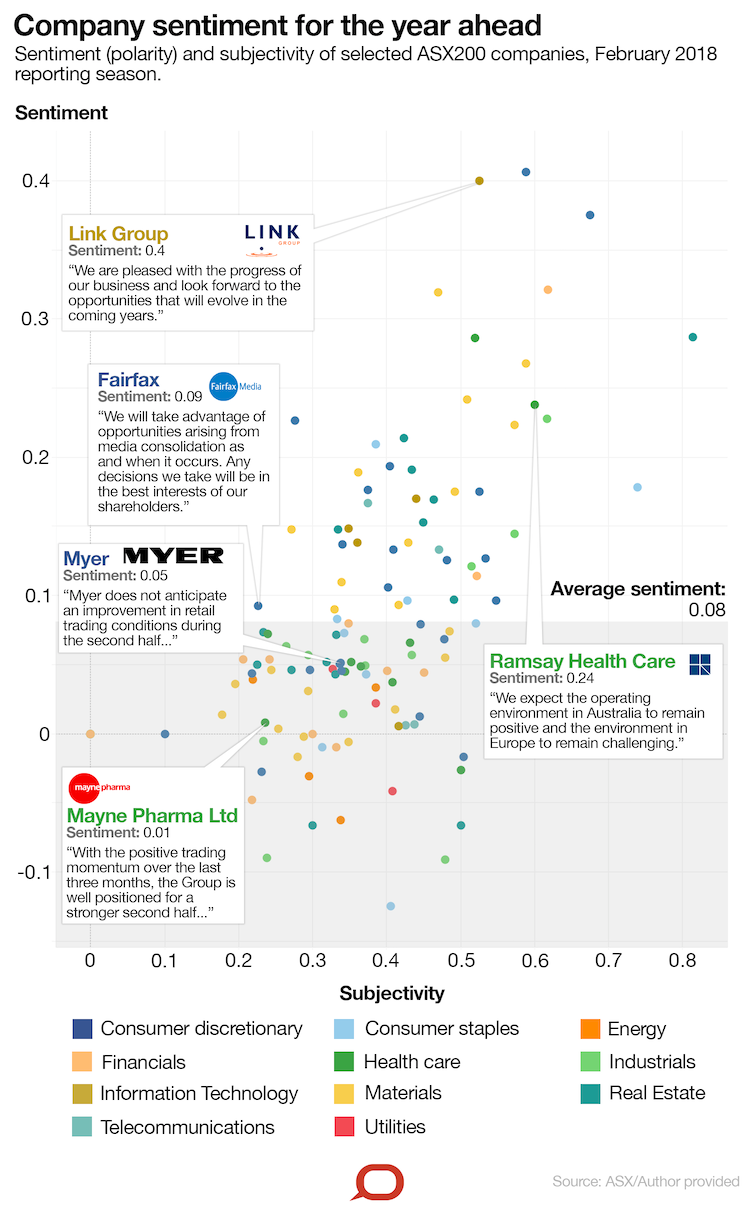 The Conversation, CC BY-ND[5] Tighter household budgets bad for business The glum business sentiment is in sectors related to consumer spending. A decline in consumer spending could be because household finances are under pressure from slow income growth and wealth[6]. Slow household income growth is driven by slow wage growth. The wage price index grew by 2%[7] over the past year, and less on a per hour basis, which means it is barely keeping up with consumer prices. The second factor is the slowing growth in household net wealth due to a slow down in house prices and financial assets. Similarly, another consumer sentiment index[8] in Australia declined 2.3% from January to February – the first decline in three months. Part of this may be due to the volatility in global share markets that occurred in the survey week in early February. This volatility is widely expected to continue and weakening sentiment in the consumer discretionary sector may reflect ongoing uncertainty in household financial wealth. Health and consumer spending sectors wary of regulation Our analysis shows business sentiment in the health care sector dropped from 0.18 to 0.07 September 2017 to March 2018 and by a smaller magnitude since March 2017. This could reflect business leaders’ ongoing concern about the sustainability of the current health system. Health business with lower than average sentiment for the year ahead include generic drugs supplier Mayne Pharma (0.01), infection control company Nanosonics (-0.03) and private hospital group Healthscope (0.04). Private health insurance premiums have increased at nearly twice[9] the growth rate of wages over the past. According to a recent survey[10], 44% of Australians believe the current mix of public and private health systems will not be around in 15 years, and 52% lack confidence that the current public hospital system will still be around in 15 years. Government regulation is a recurrent theme in business leaders’ statements. For example, diagnostic imaging company Primary Health Care notes in its report[11]: “…funding pressures will remain for the industry…Australia is at an important juncture in the delivery of health-care services.” The private health care funding system is regulated[12] to within an inch of its life in the desperate attempt to shore up its viability. For example, the Private Health Insurance Rebate, Lifetime Health Cover and the Medicare Levy Surcharge are all measures designed to force healthy young people and high income earners to subsidise the health care of others. But this regulation is not working, judging by declining proportion[13] of young people with private health insurance and the need to increase premiums[14] so dramatically. We also see regulation mentioned in the reports for the consumer discretionary sector. For example David Attenborough, the managing director and CEO of gambling entertainment giant Tabcorp said[15]: “Tabcorp is well placed to compete in the evolving regulatory landscape. This includes the introduction of point of consumption taxes, and restrictions on credit betting, advertising, inducements and live betting.” The placement Attenborough refers to may have something to do with the proposed merger with lottery retailer Tatts Group, after shareholders[16] and the Australian Competition Tribunal[17] approved the move. However gambling regulation continues to be politically charged as we saw in the fight over pokies in pubs and clubs during the Tasmanian state election[18] and are seeing in South Australian state election race[19]. Overall business sentiment not looking bad Overall business sentiment is roughly the same as at March 2017 and 2016. Some sectors are higher, such as telecommunication services (up from 0.05 to 0.08), materials (up from 0.07 to 0.11) and information technology (up from 0.13 to 0.23). This is offsetting the weaker sentiment about the year ahead in consumer discretionary, health care and energy. The overall sentiment level continues to be positive at 0.08. Ongoing strong employment growth over the past two years is a likely indicator of this positive sentiment. Overall employment growth of 3.3%[20] in the past 12 months is about double the growth in the working age population, and the Reserve Bank[21] expects it to continue to grow faster than the working age population to the end of 2019. Our analysis also looks at the subjectivity in the statements these businesses make. There’s no significant change in the subjectivity scores compared with last year. This means no increase or decrease in confidence or uncertainty around the sentiment levels. It will be interesting to see whether sentiment changes over the next six months to the September business results, given the destabilising effects of a range of factors just starting to play out. These factors include stock market volatility, the announcement of US tariff increases, company tax cuts and the probably interest rate rises.