Nearly 170 years before the invention of Bitcoin, the journalist Charles Mackay noted the way whole communities could “fix their minds upon one object and go mad in its pursuit”. Millions of people, he wrote, “become simultaneously impressed with one delusion, and run after it, till their attention is caught by some new folly more captivating than the first”.

His book Extraordinary Popular Delusions and the Madness of Crowds[1], published in 1841, identifies a series of speculative bubbles – where people bought and sold objects for increasingly steep prices until suddenly they didn’t. The best-known example he cites is the tulip mania that gripped the Netherlands in the early 17th century. Tulip bulbs soared in value to sell for up to 25,000 florins each (close to A$45,000 in today’s money) before their price collapsed.

Read more: Bitcoin turns ten – here's how it all started and what the future might hold[3]

But will it simply keep dropping? What makes Bitcoin worth anything?

To begin to answer this question, we need to understand what creates the values that drive speculative price bubbles, and then what causes prices to plunge.

The above chart shows the magnitude of the Bitcoin bubble compared with the price movement of Japanese property and dot-com bubble from four years prior to their peak until four years after.

We typically think about bubbles in financial assets such as stocks or bonds, but they can also occur with physical assets (such as property) or commodities (like tulip bulbs).

A bubble begins when the price people are willing to pay for something deviates significantly from its “intrinsic value”.

The intrinsic value of an asset is theoretical, based its “fundamental” value. Fundamental value includes: the ability to generate cash flow (e.g. interest or rental income); scarcity or rarity value (e.g. gold or diamonds); and potential use (e.g. silver and platinum are used in both jewellery and industrial operations).

A house may have fundamental value owing to the scarcity of land, its use as a home, or its ability to generate rental income. A tulip (or Bitcoin) has none of those things; even the presumed scarcity does not exist when you consider all of the alternative flowers (or cryptocurrencies) available. 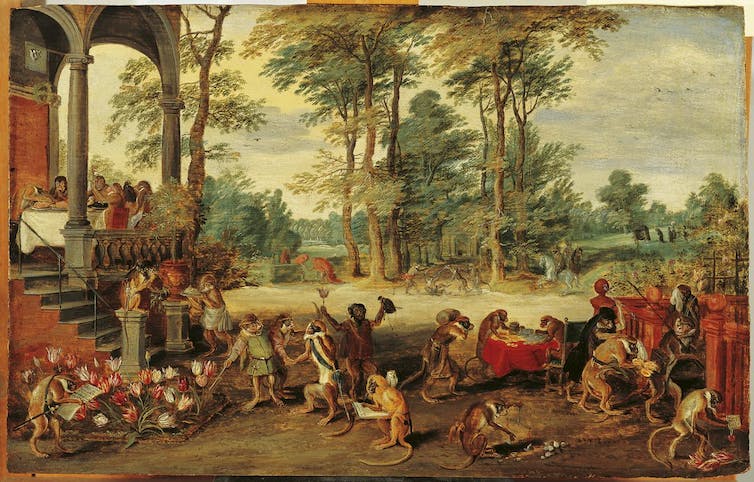 A bubble tends to occur after a sustained period of economic growth, when investors’ get used to the price an asset always increasing and credit is easily accessible.

To these conditions something more must be added for a bubble to form. That is typically a major disruption or innovation, such as the development of a new technology. Think of railways in the 19th century, electricity in the early 20th century, and the internet at the end of the 20th century.

Initially most investors tend to be cautious and “rational” about a new technology. For instance, early investment in railways took advantage of limited competition and focusing on profitable routes only. It was gradual and commercially successful.

If conditions allow, this develops into a period the economic historian Charles Kindleberger[6] described as “euphoric[7]”: investors become fixated on the ability to make a profit by selling the asset to a “greater fool” at an even higher price. 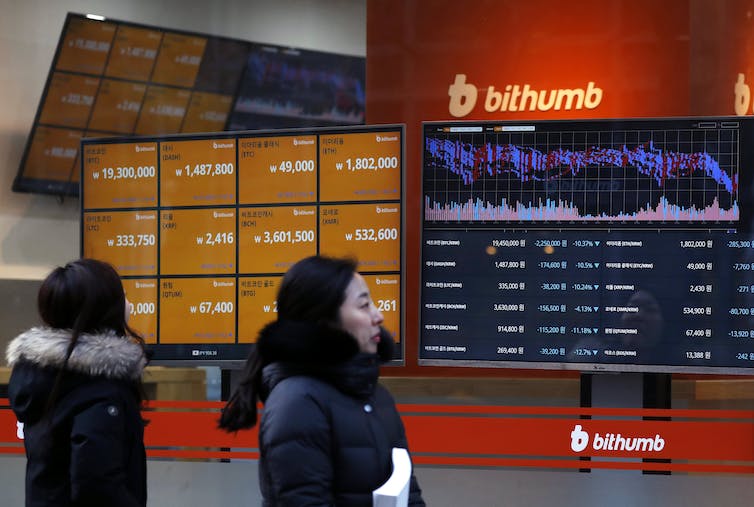 That is, they are attracted not by “fundamental” motives – the benefits from potential cash-flows such as dividend or rental income – but by “speculative” motives – the pursuit of short-term capital gains.

Higher prices attract a greater number of speculators, pushing prices higher still. Uncertainty around the significance of the new technology allows extreme valuations to be rationalised, although the justifications seem weaker as prices rise further.

The virtuous cycle of ever-rising prices continues, often fuelled by credit, until there is an event that leads to a pause in price rises. Kindleberger suggests this can be a change in government policy or an unexplained failure of a firm.

When asset prices stop rising, investors who have borrowed to finance their purchases realise the cost of interest payments on their debt will not be offset by the capital gain to be made by holding onto the asset. So they cut their losses and start to sell the asset. Once the price starts falling, more investors decide to sell.

Observers of the cryptocurrency market will find this story familiar. Bitcoin emerged following one of the longest economic expansions[8] in history, with easily accessible credit, and global interest rates at their lowest levels in 5,000 years of civilisation[9].

The surge in price attracted speculators into the Bitcoin market, helped by intense media attention. There are cases of individuals paying for Bitcoin by using credit cards or by re-mortgaging their homes[10]. The rationale for higher prices became more fantastical, with claims the price could rise to $100,000, despite more sober warnings[11].

Read more: A history of Bitcoin – told through the five different groups who bought it[12]

The possible triggers for a pause in Bitcoin price rises included concerns about increased government regulation of crypto-assets and the possibile introduction of central bank digital currencies, as well as the large theft of assets and collapse of exchanges that have dogged Bitcoin’s short history[13].

In liquid markets such as stocks (where it is inexpensive to buy and sell assets in large values) the price decline can be steep. In illiquid markets, where assets cannot easily be sold for cash, the fall can be brutal. Examples include the mortgage-backed securities (MBS) and collateralised debt obligations (CDOs) that led to the Global Financial Crisis.

Bitcoin is particularly illiquid[14]. This is due to a large number of different Bitcoin exchanges competing; often substantial transaction costs, and constraints on the capacity[15] of the Blockchain to record transactions. 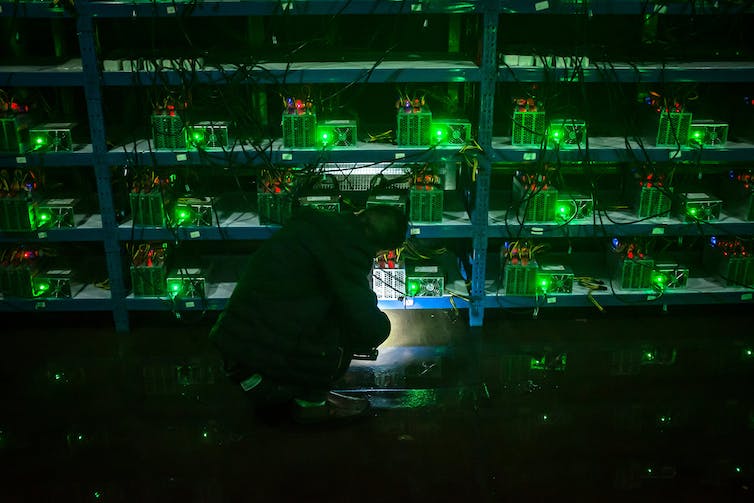 A Bitcoin ‘mine’ in China. Miners are rewarded with new currency for solving the complex math problems required to validate and record Bitcoin transactions. It requires a massive amount of computer-processing power. Liu Xingzhe/Chinafile/EPA

The aftermath of a bursting bubble can be brutal. The stock market crash of 1929 was a prelude to the Great Depression of the 1930s. The collapse in Japanese asset values after 1989 heralded a decade of low growth and deflation. The dot-com crash of 2000-01 destroyed US$8 trillion of wealth.

The effect of a crash depends the size, ownership and importance of the asset involved. The effect of the tulip crash was limited because tulip speculations involved a relatively small number of people. But sharp declines in property values during 2007 led to the worst financial crisis since the Great Depression.

Bitcoin is more like tulips. The entire market valuation was about US$300 billion at the peak. To put this into context, the US stock and housing markets are currently valued more than US$30 trillion each (the equivalent Australian markets are valued at A$2 trillion and A$6.9 trillion respectively). Relatively few investors own the majority – it is estimated that 97% of all Bitcoin are owned by just 4% of users[16]. This suggests the effects on the wider economy of the Bitcoin crash should be contained.

The true value of cryptocurrencies is widely debated. Bitcoin entrepreneurs suggest a much higher price is justified. Others, such as Eugene Fama (a Nobel Prize winner) and Warren Buffett believe it is close to worthless. The Bank of International Settlements[17] has described it as “a combination of a bubble, a Ponzi scheme and an environmental disaster”.

Read more: What is the real value of a bitcoin?[18]

Obtaining a realistic estimate of Bitcoin’s intrinsic value is tricky because it is not an asset that generates a periodic cash flow, such as interest or rental income.

For such an asset, value ultimately depends on what others are willing to pay for it. This often relates to scarcity.

This does not provide a positive story for Bitcoin. Though the total number of Bitcoins is limited, there are many competing, virtually indistinguishable cryptocurrencies (such as Ehtereum and Ripple).

Bitcoin also fails to meet the criteria of a currency[19]. Its the price movements are too volatile to be a unit of account. The transaction capacity of the Blockchain is too limited for it to be a medium of exchange. Nor does it appear to be a good store of value.

Since it produces no income, has limited scarcity value, and few people are willing to use Bitcoin as currency, it is even possible that Bitcoin has no intrinsic value.