This week’s Newspoll[1] showed the Coalition and Labor in a 50-50 tie on a two-party preferred basis, a two-point gain for Labor since the previous Newspoll three weeks ago.

This is Labor’s best result in Newspoll since late April[2].

Nearly two-thirds of respondents (64%) were satisfied with Prime Minister Scott Morrison’s performance (down four points) and 32% were dissatisfied (up three), for a net approval of +32, down seven points. While Morrison’s ratings are still very good by historical standards, this is his worst net-approval since early April[4].

In late July and early August, new coronavirus cases peaked in Victoria[5], reaching more than 700 per day. Since then, new cases have dropped back to just 73 today[6]. While the Victorian Labor government was blamed for its initial handling of the outbreak, it is likely now receiving credit for controlling it.

Read more: The government has thrown another $171 million at the problem. But a real plan for aged care has been missing all along[7]

While coronavirus deaths have not slowed, the vast majority of these are connected with aged care[8], which is a federal government responsibility. Conservative attacks[9] on the Victorian government also likely appear partisan to many voters, and this may have further contributed to the Coalition’s slide.

In an additional question, 80% of respondents thought premiers should have the authority to close their borders or restrict the entry of Australians who live in other states, while just 18% disagreed. Support for this was over 90% in Western Australia and South Australia.

Labor wins NT election with at least 13 of 25 seats

Analyst Kevin Bonham[10] has followed the late vote counting after the recent Northern Territory election. Labor has now won 13 of the 25 seats, the Country Liberal Party (CLP) six and independents two, with four seats still in some doubt.

If doubtful seats are assigned to the current leader, the result would be 15 Labor (down three since the 2016 election[11]), seven CLP (up five), two independents (down three) and one Territory Alliance.

Electoral College may save Trump

This section is an updated version of an article I had published for The Poll Bludger[12] last week.

In polls of registered or likely voters, Trump’s ratings are 42.9% approve, 53.4% disapprove (net -10.5%). Since my article three weeks ago[14], Trump’s net approval has improved about one percentage point, continuing a recovery from July lows.

Just over two months from the November 3 election, FiveThirtyEight’s national polling aggregate[15] has Democratic challenger Joe Biden’s lead over Trump slightly increasing to a 50.4% to 42.2% margin, from a 50.0% to 42.5% margin three weeks ago.

In the key battleground states, Biden leads by 6.9% in Michigan, 5.9% in Wisconsin, 5.4% in Pennsylvania, 5.3% in Florida and 3.9% in Arizona. FiveThirtyEight adjusts state polls to the current national vote trends.

On current polling, Pennsylvania and Florida are the most likely “tipping-point” states — that is, these states are most likely to give Trump or Biden the magic 270 electoral votes[17] needed to win the Electoral College and the election.

So, if Biden wins either of those states (and all the other states more favourable for him), he become president.

Trump, however, can win the election by capturing Pennsylvania, Florida and all of the more reliably Republican states. 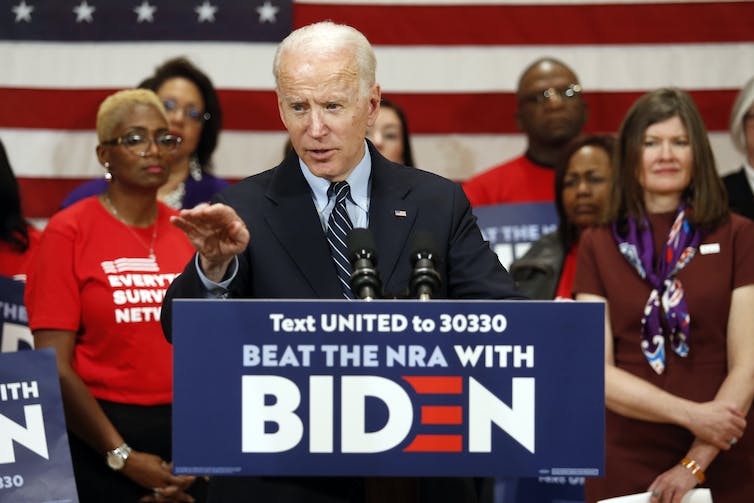 Joe Biden still leads in crucial states like Pennsylvania and Florida, but a key election model shows his chances of winning down to 69%. Paul Vernon/AP

The problem for Biden is the gap between his national polling advantage and his lead in those two tipping-point states has widened from three weeks ago. Biden leads Trump by 8.2% nationally, but only by 5.4% in Pennsylvania and 5.3% in Florida.

This makes the scenario where Trump loses the popular vote, but sneaks a win in the Electoral College more realistic.

FiveThirtyEight now has a model forecasting[19] the presidential election result, which currently gives Biden a 69% chance to win, down from about 72-73% a week ago.

Read more: How is the American President elected?[20]

Why has Biden’s advantage in tipping-point states shrunk recently? One possible reason is that the Midwestern states have a higher percentage of non-university-educated whites than nationally. Trump’s general behaviour has offended better-educated voters, and they are likely to vote for Biden.

This tweet by Cook Political analyst Dave Wasserman[21] shows whites without a university education made up over half the 2016 vote in most battleground states, but only 44% nationally.

Whites without a university education may have moved slightly back to Trump because new coronavirus cases[22] are slowing and the economy is improving.

On the economy, there is a clear downward trend[23] in new jobless claims since their peak in April, and also a downtrend in continuing jobless claims.

If the jobs situation continues to improve, and there is no resurgence in coronavirus cases, Trump could win another term in the same way he won his first term — by exploiting the greater share of whites without university education in the electoral battlegrounds than nationally.

In the RealClearPolitics[24] Senate map, meanwhile, Republicans currently lead Democrats by 46 seats to 44, with ten toss-ups. If toss-ups are assigned to the current leader, Democrats lead by 51 to 49, unchanged from three weeks ago.