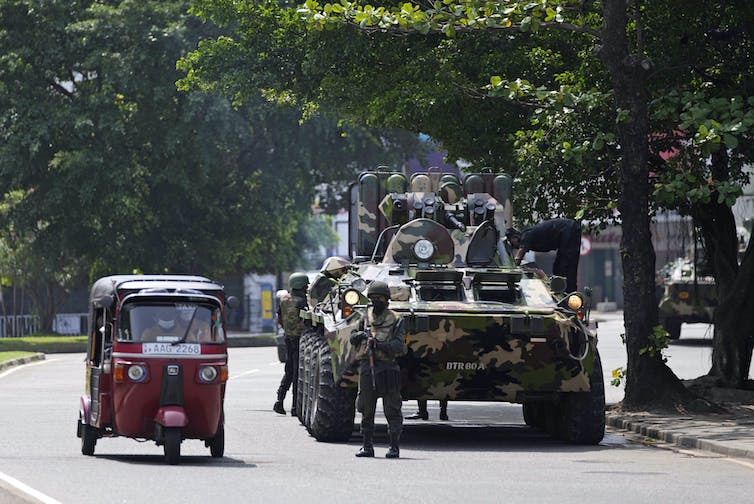 The Sri Lankan state is descending into a full blown political and economic crisis, as more people contend with starvation, death and severe disruptions. Now they are also facing the brutal violence of the state.

The BBC reports[1] at least nine people died and more than 200 were injured as vehicles and houses were set alight during fighting between government supporters and critics this week.

The island is facing its worst economic crisis since independence, and the responses of the state indicate it is incapable of protecting its citizens.

The deployment of military force, however, is unlikely to quell unrest. The anger and frustration displayed by the public, aggravated by pro-government protesters, is only likely to grow – fuelling further distrust in the ruling government.

The island is facing its worst economic crisis since independence, and the responses of the state indicate it is incapable of protecting its citizens. AP Photo/Eranga Jayawardena

The use of force

The army was this week given orders to shoot[3] “law-breakers” on sight, as people gathered in the street to protest shortages in food, fuel and medicines.

As I wrote recently in the Australian Institute of International Affairs[4], the country’s 22 million citizens are now suffering thanks to a legacy of government corruption, nepotism and poor economic management. The island is deeply in debt to China and unable to raise enough revenue due to a slew of tax cuts.

Its nationalist president, Gotabaya Rajapaksa, came to office in November 2019 after campaigning on national security and appealing to Sinhala-Buddhist nationalism.

The Rajapaksa family has since grown increasingly powerful; Gotabaya installed his brother Mahinda (himself a former president) as prime minister and appointed other relatives to ministerial positions.

Recent constitutional changes have increased the power of the president to suppress political opposition, erode democratic institutions and further entrench discrimination against minority Tamils and Muslims.

Poor economic mismanagement is not new in Sri Lanka, with consecutive governments failing to manage inflation, debt and spending.

But the decisions of the current government have brought the island to the brink of bankruptcy.

It is the worst economic crisis Sri Lanka has faced since it gained independence from British rule in 1948.

One significantly disastrous policy under Gotabaya Rajapaksa’s presidency was the banning of chemical fertiliser. This caused farmers’ livelihoods to collapse and led to lower crop yields as well as plantation closures, job losses and food shortages.

This triggered inflation and effectively crushed key export industries like tea and rubber.

The war in Ukraine has affected fuel shortages and crippled tourism, with Russia and Ukraine being key tourist markets[5].

Militarisation is the norm in Sri Lanka

Authoritarianism by the state is not new in Sri Lanka, as minority Tamils and Muslims well know. These groups faced horrifying violence before, during and after the civil war[6] fought between 1983 and 2009.

This week’s deployment[7] of security forces is a rapid development in the recent crisis, but militarisation has been a central pillar of Sri Lankan governance for years.

The ministry of defence received 12.3%[8] of total estimated government expenditure in 2022 – the highest allocation for any ministry in the budget. This is despite its civil war ending 13 years ago.

The Tamil population in the north and east of the island face the brunt of this militarisation, which encroaches on their everyday lives.

The military runs civilian life, from schools, to recreation and religious activities. There is an estimated one military personnel per six civilians in the north and east[9].

The same military massacred tens of thousands of Tamils during the war, resulting in a genocide[10].

The United Nations continues to call for investigations into violations of international humanitarian and human rights law and international crimes[11].

At least 115 Tamil parents have died since the civil war ended without knowing the whereabouts of loved ones forcibly disappeared by Sri Lankan security forces as the war ended.

One 75-year old woman, Thangarasa Selvarani[12], had been protesting on the roadside over her abducted son for five years; she recently died without finding out what had happened to her child.

Even though members of the Rajapaksa family have left, President Gotabaya remains in power. EPA/CHAMILA KARUNARATHN

The prime minister, Mahinda Rajapaksa, resigned as violence in the country escalated.

Protesters gathered at the Trincomalee port after unconfirmed reports he had gone there with family after fleeing his Colombo residence[13].

Anti-government protests across the island will continue, as President Gotabaya Rajapaksa holds firm and politicians shelter in safe houses to avoid the public.

Gotabaya is so far refusing to resign, instead seeking to appoint a new cabinet.

A new cabinet will not solve the problem, and the growing crackdown on civilians will only further erode trust in this government.

Read more: What's happening in Sri Lanka and how did the economic crisis start?[14]